This week the Democratic National Committee announced new qualifications for the third Democratic primary debate, to be held September 12th and 13th, and hosted by ABC News in partnership with Univision.

In February, the DNC unveiled new debate requirements, adding grassroots fundraising support as a metric for what is anticipated to be twelve debates over the course of the 2020 presidential cycle.

Qualifications
To qualify for the debate stage, primary candidates must meet a 1% polling threshold in at least three reputable national or early primary state polls, or a candidate must receive donations from 65,000 individual donors, with a minimum of 200 unique donors in at least 20 states.

Those rules apply to the first debate, scheduled for June 26th & 27th in Miami, Florida, and the second, set for July 30th and 31st in Detroit, Michigan.

To accommodate the large field, the debates will occur over consecutive nights in prime time, and capped at 20 candidates. Should more meet the metric, ranking on performance will determine the top 20.

Placement of candidates in one night or the other will be determined randomly.

Under the new requirements, which will apply to the third and fourth debates, however, the new threshold becomes considerably more challenging.

Uping the Ante
To qualify for the September and October debates, candidates must meet both the new polling requirements and the grassroots fundraising qualifications. 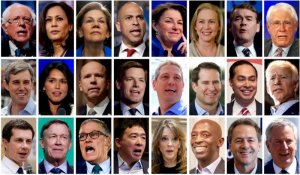 For the September debate, each poll must be publicly released between June 28, 2019, and August 28, 2019, and include a list of presidential candidates for respondents.

Fundraising: Under the September and October requirements, the qualifying numbers doubled. Candidates must receive donations from 130,000 individual donors, with a minimum of 400 unique donors in at least 20 states. For the September debate, qualifying donations must be received by 11:59 P.M. on August 28, 2019.

The October, and remaining two additional debates in 2019, are to be scheduled.

DemList will not publish on Friday, May 31st