The full scale war in Ukraine, the largest ground assault in Europe since World War II, is now in its fifth day, with additional Russian incursions over the weekend.

Two days later, Russian President Vladimir Putin announced that "a special military operation" had begun in Ukraine, in what was tantamount to a declaration of war. Then the world watched in horror as Russian missiles rained down across Ukraine, first striking military installations and air-defense targets. 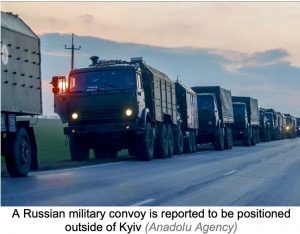 The unprovoked tragedy continued to unfold with waves of Russian troops and tanks crossing from Belarus into Ukraine.

Monday morning, British intelligence officials said that most Russian ground forces in Ukraine were massed more than 18 miles north of the capital city of Kyiv, but were being slowed by fierce resistance from Ukrainian soldiers and civilian volunteers.

Although fighting Russia, one of the most powerful military forces in the world, Ukrainians have successfully held Kyiv against all odds. Their determination is driven by fierce national pride and sheer defiance of Putin, and further inspired by the leadership of President Volodymyr Zelensky, who has refused to leave the city and his post. 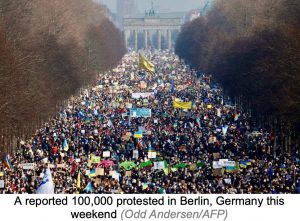 Sanctions and Severing Ties
Over the last week, the United States and 35 countries have imposed sweeping and unprecedented economic sanctions on Russia, which further escalated in the last 48 hours.

* This weekend, the US, European Union and Canada removed key Russian banks from the interbank messaging system called SWIFT, severing Russia from much of the global financial system and access to international reserves that would undermine sanctions.

* The US Treasury Department announced that it will freeze assets of the Russian Central Bank that are held in the US and impose sanctions on the Russian Direct Investment Fund.

* The US is also adding Kirill Dmitriev, an ally of Putin, and the direct investment fund he heads to the sanctions list. Allies are expected to follow suit.

* The leaders of the European Commission, France, Italy, Germany, the United Kingdom, Canada and the US announced plans to limit the sale of golden passports, a loophole that allows wealthy Russians connected to the Kremlin to become citizens in other countries and gain access to certain financial systems. 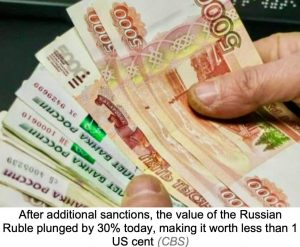 * The UK banned its citizens and businesses from making transactions with the Russian central bank, the finance ministry and the wealth fund.

* Shell and BP, two of Europe’s largest oil companies, said they would exit four oil and gas joint ventures with Gazprom, the Russian gas giant. Shell also said that it would “end its involvement” with Nord Stream 2, the now stymied gas pipeline from Russia to Germany that Shell helped finance.

* Today, the New York Stock Exchange and the Nasdaq Stock Market announced trading on the Russian stock market is halted through March 5.