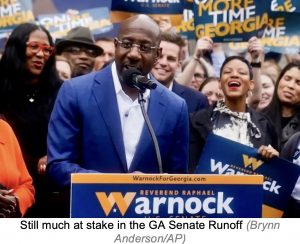 Now, three weeks after the 2022 midterm elections, a handful of key races at the federal and state level remain uncalled.

US Senate: 50 Democrats to 49 Republicans
The heated contest between incumbent Georgia Senator Raphael Warnock (D) and GOP challenger Herschel Walker (R) is the last undecided Senate race of the 2022 midterms.

While Warnock led Walker by 37,675 votes out of close to four million cast in the November 8 election, neither candidate captured more than 50% of the vote, forcing the two into a December 6 runoff.

In a win for Warnock last Wednesday, the State Supreme Court unanimously rejected GOP attempts to block early voting on Saturday, paving the way for some 70,000 voters in nearly two dozen counties who headed to the polls that day. As of Tuesday afternoon, over 835,000 Georgians had cast their votes. 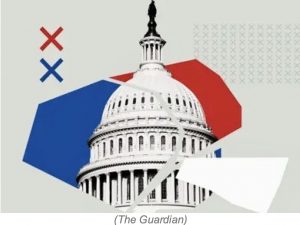 US House: 213 Democrats to 220 Republicans
Although Republicans won control of the US House, Democrats defied the historical headwinds against the party in the White House during midterms, losing less than a dozen net seats.

California is a predominately vote-by-mail state and accepts ballots postmarked by November 8 for a week after Election Day. As a result, voters could be waiting as late as December 9 for a call on this race. With no state provision for a recount, and just 599 votes separating the two candidates, it is worth the wait.

In Colorado's Third CD, Democrat Adam Frisch, with 49.92%, has conceded to incumbent Republican Lauren Boebert 50.08% (99% reporting). With just 554 votes separating the two, however, the race has not been called due to the state's automatic recount law for results within 0.5%. 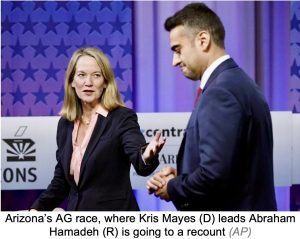 Other Outstanding
The contest for GOP-controlled Arizona State Attorney General's office is headed to an automatic recount. At 97% reporting, Democrat Kris Mayes leads Republican election denier Abraham Hamadeh by a margin of 510 votes.

On Tuesday an Arizona judge dismissed a suit by Hamadeh and the Republican National Committee against Mayes, Secretary of State Katie Hobbs and other election officials challenging the results as “afflicted with certain errors and inaccuracies.”

Democrats prevailed in flipping control of the Pennsylvania State House with 102 to Democrats 100 seats, and one seat undecided. Although the 142nd District has not been called, Democrat Mark Moffa has conceded to Republican Joe Hogan.

Republicans won 21 of the chamber's 40 seats, followed by Democrats with 13, and six Democratic-leaning Independent candidates. Although Republicans won a majority of seats, it is unclear whether the close numbers mean they are likely to continue the multipartisan power-sharing coalition that has been in place since 2017. 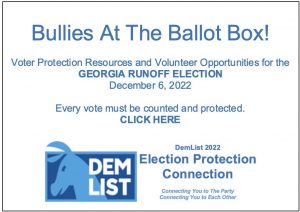 January 13, 2023 To remind us to laugh. A Special GOP/Kevin McCarthy Edition Jimmy Kimmel mocked the GOP’s embarrassing first day of Congress, in which they took control of the House, “this time...