While Democratic control of the US Senate has been secured, the fate of the US House and a number of key state races are still undecided. 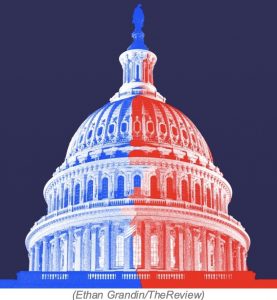 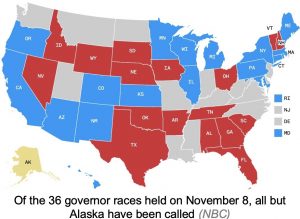 Alaska's gubernatorial is uncalled, awaiting the final tally of first-round voting. Incumbent Republican Mike Dunleavy, who has secured 52.1% with 80% of the vote reported, is expected to be reelected.

Secretaries of State: New national total: 22 Democrats to 25 Republicans
Of the country’s 47 Secretary of State offices, 27 were up for election and eight offices’ appointment authorities were on the ballot. 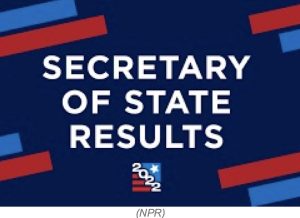 The Alaska AG's office is also undetermined, awaiting the results of the election for governor, who appoints the attorney general with confirmation from the state legislature.

Legislatures: New national total: Democrats 38 to Republicans 58
State Democrats made history this election: for the first time since 1934, the party controlling the White House did not lose a single state legislative chamber.

Flipped: In the 88 of the country's 99 state legislative chambers that held elections on November 8, Democrats held all 35 of their current chambers and flipped an additional three.

In flipping the Michigan State Senate and House, and the Minnesota State Senate, Democrats secured a trifecta in both states.

Democrats also maintained their majorities in Colorado, Maine and New Mexico and won a supermajority in the Vermont State House and Nevada State Assembly, while preventing Republicans from gaining veto-proof supermajorities in the North Carolina and Wisconsin state legislatures.

Republicans maintained their narrow majority in Arizona and New Hampshire House and Senate.

Outstanding: The battle for control of Pennsylvania's GOP-controlled State House is coming down to the wire, with Democrats only one seat away from flipping the chamber. Two districts remain uncalled, with only a few hundred votes left to count.