It has been 10 days since the unprecedented leak of the draft United States Supreme Court's decision to strike down the landmark 1973 Roe v. Wade abortion rights decision.

An outraged electorate exploded nationwide, online and in the streets, with protests erupting in every major city, state legislative chamber and in the halls of Congress. 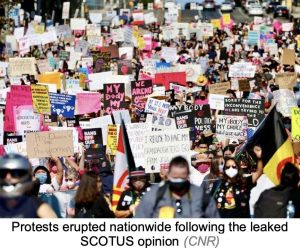 The leaked draft, dated February 10, 2022 and first reported by Politico, is the first known breach of its kind in the court's 232-year history.

It is also unprecedented in scope, written in extreme terms by Alito with a full-scale attack on the right to privacy under the Fourteenth Amendment. The threat to other constitutionally-guaranteed individual rights like gay marriage, consensual same-sex relations and even contraception, is monumental.

Congress
The US Senate yesterday struck down the first measure to counter the impending decision with federal legislation to codify women's healthcare rights under Roe v. Wade.

The 51-49 vote on the Women's Health Protection Act (WHPA), was rejected by every Republican Senator and one Democratic, West Virginia Senator Joe Manchin, falling short of the 60 votes needed to override the filibuster threshold and take up the sweeping legislation. 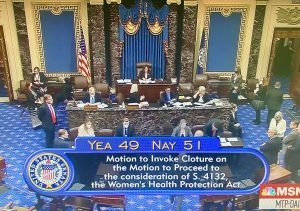 Although the final vote in the deeply divided 50-50 Senate was anticipated, Democrats wanted the public record to reflect the extremist vote of every Republican's choice to overturn a woman's right to abortion, one that is supported by 61% of American adults.

Vice President Kamala Harris, who as President of the Senate symbolically oversaw the vote from the dais, said of the result, “This vote clearly suggests that the Senate is not where the majority of Americans are on this issue. A priority for all that care about this issue -- the priority -- should be to elect pro-choice leaders.”

Despite decades of efforts to chip away at abortion rights in every judicial branch and at every level of government, GOP leaders have remained largely quiet since the release of the opinion, focusing on the leak itself rather than the impending outcome in an attempt to qualm the backlash against GOP candidates going into the midterm elections. 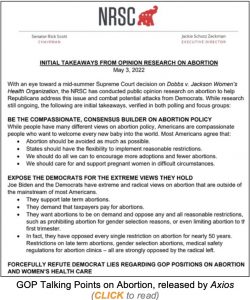 In a May 3 National Republican Senatorial Committee (NRSC) advisory memo written "to help Republicans address this issue and combat potential attacks from Democrats," candidates are urged to avoid the subject of abortion "as much as possible."

The document, first obtained by Axios, coaches candidates to say, “States should have the flexibility to implement reasonable restrictions,” and offers sample language like, "The leak of this document is troubling and is indicative of the Radical Left’s mission to undermine the institution of the Supreme Court."

Next steps on the federal level are unclear. Pro-choice Republicans Susan Collins (ME) and Lisa Murkowski (AK), who voted against the Women's Health Protection Act as having gone too "far beyond the precedent established in Roe and Casey," are crafting their own alternative legislation.

A group of Democratic Senators, led by Patty Murray (WA) and including Debbie Stabenow (MI), Elizabeth Warren (MA), Catherine Cortez Masto (NV), Amy Klobuchar (MN) and Tammy Baldwin (WI), are reportedly working on measures that may be advanced through legislation or action by the administration.

The States
A reversal of Roe would set off a wave of restrictive laws across the country, with as many as 26 states already poised to ban all or nearly all abortions.

16 states and DC have laws on the books that will protect abortion rights should Roe go down. Four of those, including Colorado, New Jersey, Oregon and Vermont, and DC, have codified the right to abortion throughout pregnancy without state interference. 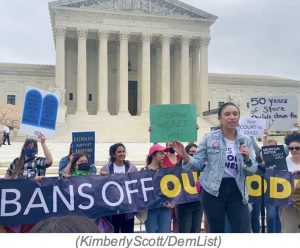 Twelve states explicitly permit abortion prior to viability or when necessary to protect the life or health of the pregnant person. Those include California, Connecticut, Delaware, Hawaii, Illinois, Maine, Maryland, Massachusetts, Nevada, New York, Rhode Island and Washington.

In the wake of the leaked SCOTUS opinion, however, legislators in some states are proposing even more new restrictive laws governing reproductive rights. Proposed legislation ranges from outright criminalization of abortion to making it illegal for residents to travel to legal states for the procedure. 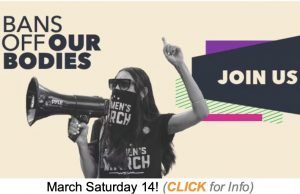 The People
While lawmakers debate the legislative battles, activists and organizations are in high-alert trying to harness the power of a public distraught and angry over the looming threat to Roe.

According to the Washington Post, Planned Parenthood and its action arm reported a tenfold increase in people signing up to volunteer for mobilization efforts less than 24 hours after Politico first published Alito’s draft opinion. NARAL Pro-Choice America netted its largest amount in a single day, garnering a 1,403% increase in donations compared with the day before the leak.

This Saturday, May 14, the Women's March, Planned Parenthood and other organizers are planning a Bans Off Our Bodies National Day of Action, with rallies in close to 400 cities across the country and internationally.

Bans Off Our Bodies National Day of Action
Saturday, May 14, 2022
Details: Washington, DC Rally
12:00pm-3:00pm EST, NE side of the Washington Monument
2:00pm March to the Supreme Court
Find Your City Rally
Find an International Rally with Democrats Abroad