Three other members of the former president's legal team were also subpoenaed, as well as leaders of the “America First” White nationalist movement who participated in the insurrection and events leading up to that day.

The subpoenas come as the US Supreme Court rejected an appeal by Trump to block the National Archives from releasing over 700 pages of White House documents which are now being sent to the January 6th Committee. 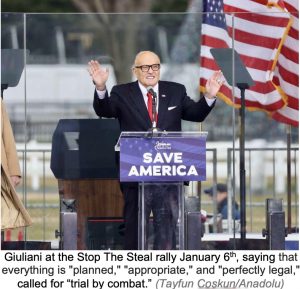 The "Strike Force"
Rudy Guiliani, the embattled former Mayor of New York City, led Trump's legal team, self-dubbed by one member as "the Elite Strike Force." Guiliani spearheaded a set of conspiracy-filled lawsuits on behalf of Trump in which they made unsubstantiated claims of fraud in the 2020 presidential election and oversaw a plot to pressure state officials to overturn the election results.

Giuliani, who ran briefly for the Republican Party's presidential nomination in 2008, joined Trump's legal team in 2018 and was a central figure in the Trump–Ukraine scandal which led to the former President's first impeachment.

Giuliani's activities on behalf of Trump have drawn intense national scrutiny, including allegations that he engaged in corruption and profiteering. Last June his law license was suspended after a New York court ruled he made “demonstrably false and misleading statements” in his effort to use the courts, state legislatures and Congress to try to overturn his defeat. 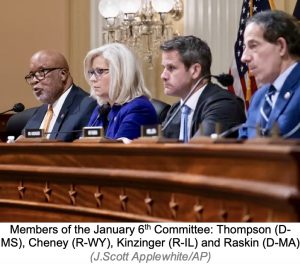 In a letter to Giuliani, the Committee said it had “credible evidence” that he participated in attempts to “disrupt or delay the certification of the election results,” persuade state legislators to “take steps to overturn the election results” and urge Mr. Trump to order the seizure of voting machines.

Jenna Ellis, who joined Trump's legal team in 2019, authored two memos on how Trump could invalidate the election results. One of those detailed how former Vice President might use constitutional authority to reject or delay counting electoral votes from states where Trump’s allies had attempted to arrange for the submission of an alternate slate of electors. 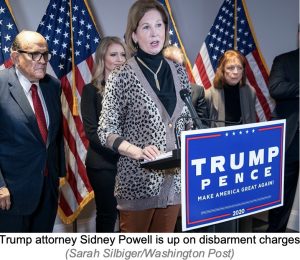 Powell was among the leading promoters of some of the most far-fetched and fantastical claims of widespread voter fraud, including a bizarre conspiracy theory alleging a vast plot by China, Venezuela and the financier George Soros to hack into Dominion Voting Systems machines to flip votes away from Trump to Biden.

Her organization, Defending the Republic, raised $14.9 million between December 2020 and July 2021 on false claims that election machines were rigged. The organization has since been investigated for multiple violations of law. Powell also represented former Trump NSA Director Michael Flynn, who was an original board member of Defending the Republic, and whom she claimed was framed by a covert "deep state" operation. 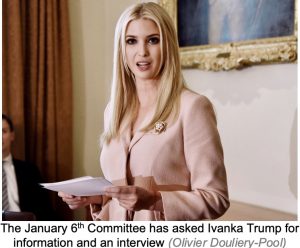 Boris Epshteyn, an attorney and Russian-American political strategist, served as a Trump campaign advisor and part of the "strike" team that sought to overturn the election results. He pursued allegations of election fraud in Nevada and Arizona and, according to the Committee, participated in a call with Trump on the morning of the insurrection, “during which options were discussed to delay the certification of election results in light of Pence's unwillingness to deny or delay certification."

Epshteyn also attended planning meetings at the Willard Hotel in the days leading up to the insurrection. 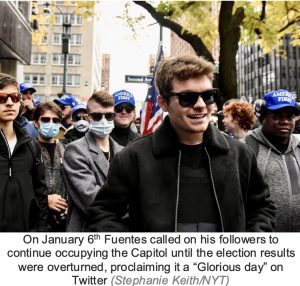 The Insurrectionists
On Wednesday, the January 6th Committee issued subpoenas to Nicholas J. Fuentes and Patrick Casey, two leaders of the “America First” or “Groyper” movement who were present at the Capitol attack.

Both individuals participated in a series of events leading up to January 6th which promoted unsupported claims of election fraud. Those include rallies in Michigan, Wisconsin, Georgia and two in Washington, DC where they called for the destruction of the Republican Party for failing to overturn the election.

Nicholas Fuentes is a far-right white nationalist political commentator and live streamer, a founder of the “America First” movement and head of the America First PAC.

Fuentes' YouTube channel was permanently suspended in February for violating their hate speech policy, and since January 6th, the White supremacist has also been banned every major social media platform for his extremist, racist and antisemitic language, and for "inciting violent and illegal activities."

Patrick Casey was the leader of the White supremacist and neo-Nazi group Evropa, which in 2019 rebranded as the American Identity Movement which advocated for seizing control of the United States government and replacing it with a white-only "identitarian" regime. After disbanding the organization in November of 2020, Casey joined forces with Fuentes.

According to a Committee statement, both "Fuentes and Casey received tens of thousands of dollars in Bitcoin from a French computer programmer, funds the FBI has scrutinized to assess whether funds from this donor were linked to the Capitol attack or otherwise used to fund illegal activity."

Related
DemDaily: One Year Later. The Capitol Insurrection 1/6/21
DemDaily: Update on The Insurrection: The Subpoena List 12/17/21

April 15, 2021 The US Senate currently stands at 50 Democrats to 50 Republicans. As Vice President Kamala Harris serves as the President of the Senate and has the tiebreaking vote, Democrats...