Yesterday, the US House issued its latest of nearly 50 subpoenas that have been served over the last three months as a part of its investigation into the Capitol insurrection and the key players involved in efforts to stop the counting of the electoral votes on January 6, 2021.

The House Select Committee to Investigate the January 6th Attack on the United States Capitol has now interviewed over 300 people, including those in the immediate sphere of former President Trump leading up to, and during the attack, issuing subpoenas to those reluctant to cooperate.

Two witnesses, former Trump advisor Steve Bannon and former White House Chief of Staff Mark Meadows, have been held in criminal contempt of Congress for refusing to testify to the Committee.

On Tuesday, December 14th, the House voted 222–208 to find Meadows in criminal contempt of Congress, referring the matter to the Justice Department. It makes Meadows, who represented North Carolina for four terms in Congress, the first former member of Congress in history to earn such a condemnation. 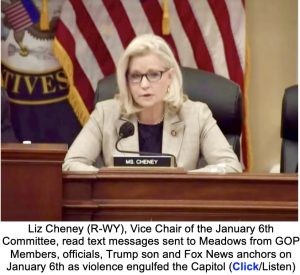 Although Meadows, who many believe is central to the investigation, originally cooperated with the Committee, turning over 9,000 pages of documents. He recently reversed his stance, however, saying he "remains under the instruction of former President Trump" not to comply.

On October 21st, Steve Bannon, was held in Contempt of Congress for refusing to company with a subpoena, which he said was on the orders of Trump, who claimed Bannon had executive privilege. On November 12th, Bannon was indicted by a federal grand jury on two counts of contempt of Congress brought against him by the Justice Department.

On November 9th, DC District Court Judge Tanya Chutkan denied Trump's request to stop the National Archives and Records Administration (NARA) from releasing documents saying, "[Trump's] position that he may override the express will of the executive branch appears to be premised on the notion that his executive power 'exists in perpetuity.' President's are not kings and plaintiff s not President." On December 9th, the DC Circuit Court of Appeals upheld Chutkan's ruling but gave Trump 14 days to appeal to the U.S. Supreme Court. 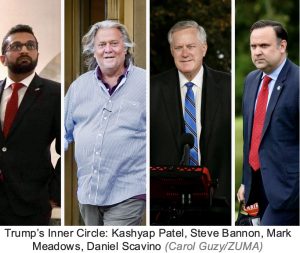 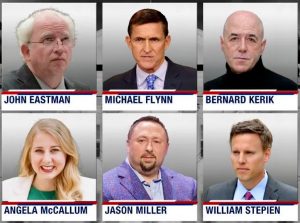 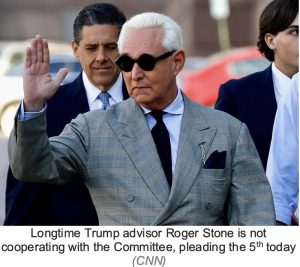 Today, Trump advisor Roger Stone appeared before the House January 6th Committee, where he said he invoked his Fifth Amendment right against self-incrimination in response to every question asked of him. 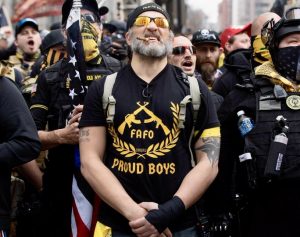 * Oath Keepers, another right-wing extremist group. 18 of their members have been indicted by a federal grand jury for their role in the attack.
* Elmer Stewart Rhodes, President of the Oath Keepers who repeatedly advocated for violence to ensure that Trump remain president, and who was in contact with his members throughout the attack.
* 1st Amendment Praetorian/Robert Patrick Lewis, whose organization provided security at multiple rallies leading up to January 6th that sought to protest the 2020 presidential election results and advocated violence.

The subpoena issued yesterday was to James “Phil” Waldron, a retired Army colonel and purported author of a 38-page PowerPoint slideshow titled “Election Fraud, Foreign Interference & Options for 6 JAN,” which was used to brief Members of Congress, and was filled with extreme plans on how to overturn the election.

The document recommended that Trump declare a national emergency to delay the certification of the election, and claimed that China and Venezuela had obtained control over the voting infrastructure in a majority of states. 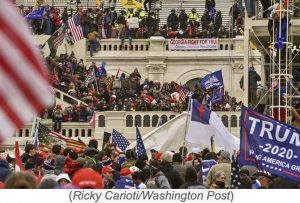