Although Democrats may have defied the tides of history in beating back the anticipated "red tsunami" in the 2022 midterms, they are still struggling to retain their majority, with 37 seats still uncalled in the US House of Representatives.

Flipped/Gains
As of 5pm today, Democrats flipped or made gains under the newly redistricted maps in seven seats, while Republicans made gains in 19 seats.

For Republicans: Congressman Steve Chalbot, first elected to Congress in 1994. He lost with 47.5% to Democrat Greg Landsman's 52.5% in Ohio's Cincinnati-based First CD. 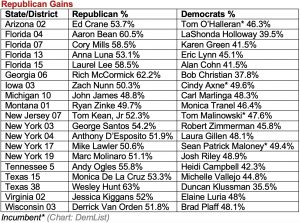 Obama rocked the house at Saturday night’s annual White House Correspondents’ Dinner. The event gathers the best and brightest of the press corps, and is the one time when Hollywood...

October 3, 2022  In one very riled-up room in the Mayflower Hotel in Washington, DC last Friday, some 500 women leaders and supporters let loose about their critical role in the elections and the...