The long road to 2022 redistricting is almost over, with currently just four state maps in New York, New Hampshire, Kansas and Missouri still making their way through the courts. 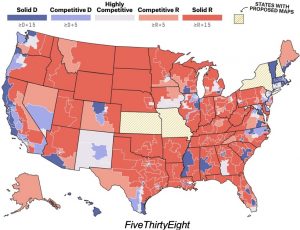 How It Works
The 2022 redistricting process was historically upended by the months-long delay in the census count caused by the coronavirus pandemic and interference by the Trump administration. In what is already a contentious and partisan process, the delay cut significantly into the timeline for mapmakers to draw their lines - a process that is different in every state.

In the states where elected officials decide the borders of congressional maps, 19 are fully in Republican control, eight are held by Democrats, and eight are split. The remainder are determined by a commission, committee, or hybrid of the legislature and a committee that draws the lines.

In six states which have only one congressional district - Alaska, Delaware, North Dakota, South Dakota, Vermont and Wyoming - redistricting is limited to state legislative seats.

Despite the GOP advantage going into the cycle, Democrats have faired much better than anticipated. Redistricting has so far created seven more Democratic-leaning seats nationally vs. one more Republican-leaning seat. This is due in part to aggressive map-drawing by Democrats in states such as Illinois, as well as court decisions overturning Republican gerrymanders in Kansas and North Carolina.

Republicans, however, are still expected to come out of the process with a net gain of at least four seats thanks to successfully manipulated maps in states like Florida and conversion of competitive districts to safer red seats in states like Texas. 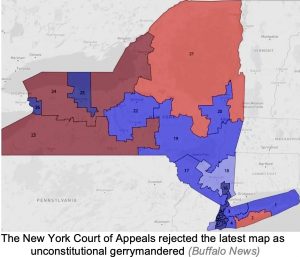 New York
On Wednesday, the New York Court of Appeals upheld a lower court ruling that new congressional and State Senate maps had been unconstitutionally gerrymandered in favor of Democrats in violation of a 2014 constitutional amendment designed to rout out political gamesmanship in redistricting.

The judges also ruled that the legislature did not follow proper procedure in passing the maps after an independent redistricting commission failed to reach a consensus.

Democrats currently hold 19 of the state's 27 congressional districts but will be losing one seat in redistricting due to population shifts. The new maps would have given Democrats a strong majority in 22 of the state's 26 districts.

Citing a need for judicial oversight, the judges ordered a court-appointed special master to draft replacement lines for this year’s 2022 midterm elections. Although a deadline was not set, they said maps will be adopted "with all due haste," adding that it will "likely be necessary" to move the congressional and state Senate primary elections from June 28 to August.

New Hampshire
The Granite State's map may also be headed to a special master.

The first map, passed March 17, 2022 by the new GOP majority, shifted several Democratic-leaning communities from the 1st District to the 2nd District, crafting one Democratic seat and one Republican seat. In response, on March 22, Governor John Sununu (R), who has veto authority, released his own map, which "passes the smell test" and keeps both districts in the “highly competitive” category.

Democrats filed suit on March 31, saying the legislature and governor had reached an impasse and that they believed the maps wouldn’t be ready in time for the 2022 elections without court intervention.

On April 11, the New Hampshire Supreme Court announced that it would appoint a special master to draw the state’s next congressional map if Sununu and the state legislature can’t agree on a map by late May.

Yesterday, New Hampshire's House Committee on Redistricting advanced a new congressional map proposal similar to the one previously passed by the GOP-controlled legislature, and which puts both Congressional Democrats in the same district. Sununu stated it still does not meet his approval.

Kansas
On Monday, April 25, a Wyandotte County District Court judge struck down Kansas’s Republican-passed congressional map, ruling that the lines were politically gerrymandered and diluted the voice of minority voters.

The Sunflower State currently has three Republican members of Congress and one Democrat, Congresswoman Sharice Davids (CD-3). The map in question splits up majority-minority Wyandotte County, where Kansas City is located, for the first time since the 1980s, shifting Davids' seat from a partisan lean of D+4 to R+3, and endangering her reelection prospects.

Kansas GOP Attorney General Derick Schmidt is appealing the decision to the Kansas Supreme Court, which may not be inclined to overturn the decision as five of its seven members were appointed by Democratic governors.

If the High Court upholds the ruling, it would be a tight turnaround for the legislature to redraw the congressional map before the June filing for candidates to run in the August 2 primary. 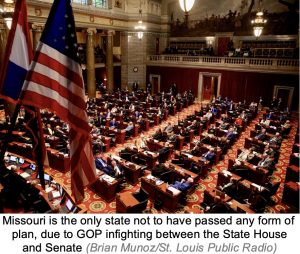 Missouri
With the state’s Republican-led legislature still at an impasse on redistricting, lawmakers on both sides of the aisle are seeking to have the court intervene to break the ongoing stalemate.

Although the GOP controls the Missouri House, Senate and the governors office, they have been unable to agree on a final plan to redraw the state's eight congressional districts, currently held by six Republicans and two Democrats.

Both legislative bodies have gone back and forth since January after the State House first approved a congressional map that featured two solidly Democratic seats, five solidly Republican seats and one light-red seat in suburban St. Louis. A group of conservative hard-liners filibustered the House’s proposal, insisting instead on the passage of a 7-1 Republican map that would have dismantled the Democratic-held 5th District around Kansas City.

In the latest round, the Senate reached a compromise map March 24, along with a separate measure that would allow the map to take effect before the state’s March 29 candidate filing deadline. After the House rejected that proposal, lawsuits were filed in both federal and state court asking the judiciary to intervene and order a new congressional map before this summer's August 2 primary election. 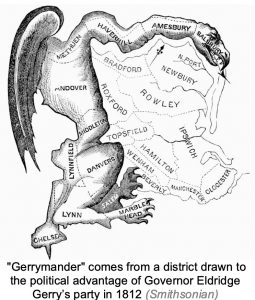 Other Developments
The US Supreme Court reinstated a Republican-drawn Alabama map that a federal court had said diluted the power of Black voters. In Maryland, Democrats were forced to redraw their map after a state judge threw out their previous effort as an “extreme gerrymander."

The US Supreme Court upheld, for now, a North Carolina state court's redistricting map, drawn after a three-judge panel rejected a GOP-drawn map as unconstitutionally partisan.

The US Supreme Court allowed a map approved by a Pennsylvania state court to stand, rejecting a request to restore lines created by Republican lawmakers.

The Ohio State Supreme Court will not hear arguments on the new GOP-gerrymandered map until after the May 3 primary, suggesting it will not rule in time to affect the 2022 election.

On April 22, Florida Governor Ron DeSantis (R) signed his own congressional map into law after the GOP legislature controversially voted to approve it earlier in the week. Lawsuits challenging the GOP map as diminishing Black political representation may not be settled in time for the 2022 elections