The Presidential Inaugural Committee (PIC) has released more details on the inaugural festivities surrounding the historic inauguration of Joe Biden and Kamala Harris as our 46th President and Vice President. 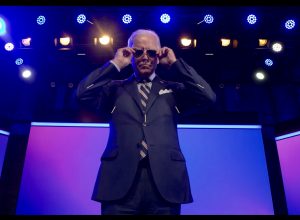 PIC and the Joint Congressional Committee on Inaugural Ceremonies (JCCIC) previously announced that the official swearing-in and inauguration ceremonies will still be held in person "with a limited footprint," but that most of the traditional celebrations and events would be held virtually.

In a short teaser video released Friday, however, PIC says "while things may look different this year, the inauguration will honor our traditions and bring Americans together," offering a preview of the innovative program the country will watch, safely, from home.

The 59th Inaugural, themed "Our Determined Democracy: Forging a More Perfect Union," is expected to profile the vision of the Biden-Harris Administration through a series of events, profiles and performances much like last Summer's Democratic National Convention, the first virtual national event of its kind. 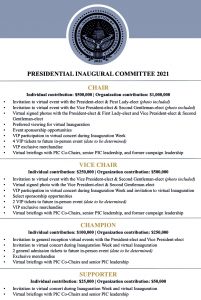 The Presidential Inaugural Committee (PIC), which is responsible for raising millions of dollars to fund the program, also released the inaugural finance packages with a suite of VIP options ranging from $25,000 to $500,000.

The predominantly virtual slate of events reflects the committee's determination to protect the health of all participants, with just one in-person event at a future "date to be determined."

Even the photo ops with the new President, Vice President and their spouses, will be virtual.

Federal law does not require the disclosure of donations to inaugural committees until 90 days after the event, but Biden's inaugural committee said it will disclose the names of its larger donors in advance of the January 20th ceremonies.

Although there are no legal limits on the dollar amount of donations the committee can accept, PIC is voluntarily limiting corporate donations to $1 million and individual donations to $500,000.

A coalition of 50 progressive organizations organized by Demand Progress recently sent a letter to PIC CEO Tony Allen urging the committee to expand their contribution ban "to encompass all major corporate sectors" in order to prevent them "from wielding undue influence." 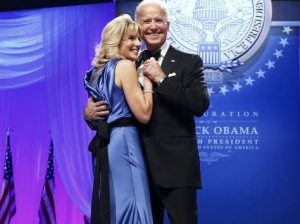 The Bidens in 2013. No Balls this year (Chip Somodevilla)

More details will be forthcoming on the public program, performers and the "reimagined" inaugural parade, which is expected to feature video and live performances in cities across the country.

In the interim, the committee is discouraging travel to the nation's capital for the official ceremonies, which will be live-streamed and broadcast worldwide.

The number of tickets for swearing-in on the West Front of the Capitol have been cut from 200,000 to just two tickets for each of the 535 members of Congress.