On Friday, the Texas Supreme Court dealt another blow to abortion rights and the fight against the state's extremist "Heartbeat Act." In its decision, the court all but eliminated the ability of abortion providers to bring suit against proponents of the anti-abortion legislation, which also incentivizes everyday citizens to police those aiding an illegal abortion. 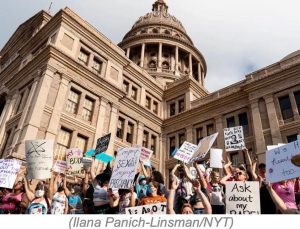 Background on the Bill
The "Heartbeat Act," the most restrictive abortion ban in the country, is the first of its kind passed in any state since the Supreme Court's landmark 1973 decision in Roe v. Wade, which legalized abortion nationwide.

While other states have attempted similar "heartbeat" bills, they were found to be at odds with the Supreme Court's precedents of the constitutionally-protected right to an abortion established in Roe. That core ruling was upheld in the 1992 case Planned Parenthood v. Casey, albeit in a weaker form that enabled states to enact restrictions short of outright bans.

In an end-run around the US Supreme Court and the constitutional precedent, the law allows public citizens to bring civil lawsuits against abortion providers or anyone else found to "aid or abet" illegal abortions. The lawsuits would not be against the women having the abortion but against anyone including counselors, friends who finance an abortion, or even an individual who drove a woman to the appointment. 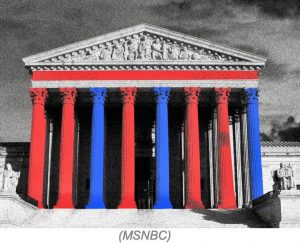 Legal Landmarks Explained
On September 1, 2021, the same day SB 8 went into effect, the Supreme Court of the United States (SCOTUS), by a 5-4 vote, denied an emergency request by Texas abortion providers in Whole Woman’s Health v. Jackson to block enforcement of the law. In doing so, they effectively ended all legal abortion care in the Lone Star State.

On September 23, 2021, Whole Woman's Health appealed to the US Supreme Court, asking the justices to weigh in on the law’s private-enforcement mechanism. The justices agreed to take up their case, along with the Biden administration’s Department of Justice (DOJ) challenge to the law in United States v. Texas, with oral hearings scheduled for November 1, 2021. In the interim, the law would remain in effect. 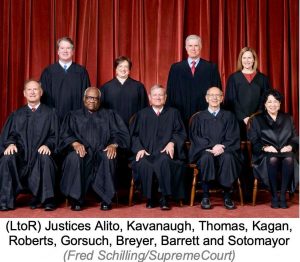 On December 10, 2021, SCOTUS voted 5-4 to let the Texas law stand, while returning WWH v. Jackson back to the lower courts with limited options for pursuing further legal challenges.

Writing for the majority, Justice Neil Gorsuch, joined by fellow conservatives Samuel Alito, Amy Coney Barrett, Brett Kavanaugh and Clarence Thomas, ruled the providers in WWH v. Jackson could not proceed with lawsuits against the state judges, clerks or State Attorney General Ken Paxton since these officials lack the authority to enforce SB 8.

The court ruled, however, that the providers’ lawsuit could go forward against state medical licensing officials, along with the head of the Texas health department, since those officials would play a role in bringing disciplinary actions against providers if they violated SB 8.

In the dissent, Chief Justice John Roberts, who was joined by the Court's three liberal justices, Stephen Breyer, Elena Kagan and Sonia Sotomayor, warned that SB 8's clear purpose was to nullify the Supreme Court's precedent rulings and the rights acquired under those judgments, risking making "a solemn mockery" of the Constitution itself.

In a separate, unsigned order, the justices dismissed the administration's challenge in US v. Texas, ruling that a review by the High Court had been "improvidently granted." 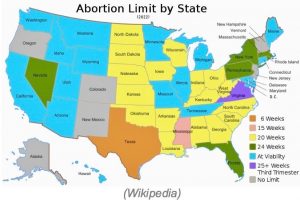 On January 20, 2022, SCOTUS denied the Texas abortion providers' petition to compel the 5th Circuit Court to send the case to the District Court. The justice's 6-3 decision, issued without a written majority opinion, meant the abortion providers’ challenge went instead to the state Supreme Court.

On March 11, 2022, after a two-month delay, the Texas Supreme Court ruled that state licensing officials which had previously been deemed subject to suit by challengers to SB 8, were now exempt from legal action.

In the unanimous decision, the court concluded that while the state’s licensing officials had the authority to discipline providers for violating other abortion restrictions, under the Heartbeat Act, that authority did not apply. “The act’s emphatic, unambiguous and repeated provisions” declare that a private civil action is the “exclusive” method for enforcing the law, the justices wrote, adding, “We cannot rewrite the statute.”

Their decision closes the door to future legal action by the abortion providers. “With this ruling, the sliver of this case that we were left with is gone,” said Center for Reproductive Rights President Nancy Northup to the New York Times.

The Big Picture
The ultimate legal standing of all these bills will be determined by a Mississippi case before the Supreme Court now which directly challenges the constitutionality of the right to abortion under Roe v. Wade.

SCOTUS heard the first oral arguments in Dobbs v. Jackson Women's Health Organization in October 2021, but a decision by the justices is not expected until June or July when the Court announces major decisions before its summer recess.