At 11:15pm ET tonight, after over fourteen hours of debate, the House Judiciary Committee unexpectedly recessed until Friday morning -- without a vote on the articles of impeachment against President Donald Trump today.

Although the announcement by Committee Chairman Jerrold Nadler came as a surprise, the length of the marathon debate, and the hour, pushed the headlines into the next day. 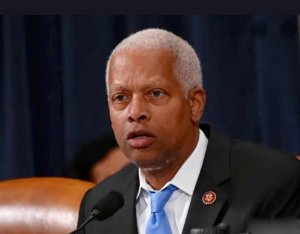 The Debate Timeline
Just hours after the close of DOJ Inspector General Michael Horowitz's testimony concluded Wednesday night, the committee began their markup, or debate and consideration of amendments, on the two articles of abuse of power and obstruction of Congress.

Each of the 41-committee members was allotted five minutes to enter their personal speeches into the permanent Congressional record of the historic hearings.

Congressman Hank Johnson (D-GA), who said he was not in support of impeachment prior to the hearings, spoke decidedly to his change of mind.

"I'm a black man representing Georgia, born when Jim Crow was alive and well...I have constituents who remember what it's like to live in a democracy in name only and they can tell you what it's like when powerful men undermine fair and free elections...We're here because President Trump tried to sabotage that fragile process."

This morning, at 9:00am, members resumed their debate, with Democrats focused on reviewing the evidence against Trump, and Republicans attempting to discredit individual witnesses and players, including Trump's political opponent Joe Biden, and his son Hunter. Trump's attempts to pressure Ukrainian President Volodymyr Zelensky to launch a smear investigation against the Bidens are at the heart of the impeachment articles. 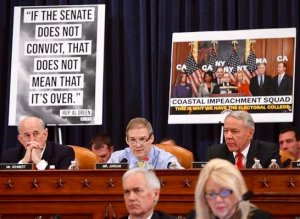 As the afternoon gave way to evening, the debate became more determined and rancorous as lawmakers passionately, in a marathon session, made the case from their individual perspectives.
In the 12th hour of the debate, GOP Congressman Tom McClintock (CA) declared, “The same talking points have been repeated over and over again ad nauseam by both sides. Repeating a fact over and over doesn't make it true and denying a fact over and over doesn't make it false - everybody knows this, everybody watching knows this."

In the end, all five proposed amendments went down, divided along party lines, with the Democratic majority ultimately preserving the original language of the articles of impeachment in advance of a vote Friday morning.

The Backdrop
Republican members' loyalty to the President can be tied to his continued popularity among the GOP's base.  According to the Washington Post, an average of national polls conducted over the course of the impeachment hearings show Trump's approval has remained static at approximately 40% with the general public, but 87% of Republicans are opposed to impeaching and removing him.

Those numbers are ever-present in the minds of Democrats who were elected in red districts which Trump won in 2016. 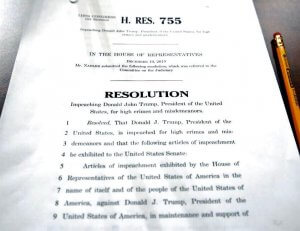 In recent days, Republicans have mounted an extraordinary online ad blitz, pouring millions into facebook and other platforms in anti-impeachment ads, including targeted ads against vulnerable House Democrats.

With a 236-199 voting majority in the House, Democrats will be comfortable with the anticipated defection of a handful of moderate Democrats who may need to their final vote against impeachment in order to secure their reelection.

This evening, however, all 24 Democratic Committee members voted to advance the articles of impeachment to a vote before the full House of Representatives next week.

The Bottom Line
In the interim, tonight, Donald J. Trump moved one step closer to becoming the third President in US history to be impeached for misconduct in office.

As of this writing, Trump had tweeted or retweeted more than 100 times today on the impeachment hearings -- no doubt another historical record.

The Judiciary Committee will resume Friday morning at 10:00am when they are expected to approve the Articles of Impeachment to a vote in the full US House of Representatives next week.