Subtitled "Truth, Lies and Leadership," the book is Comey's account of his brief tenure under President Trump and provides greater insight into the relationship between the two men, and the details that led to its public demise. 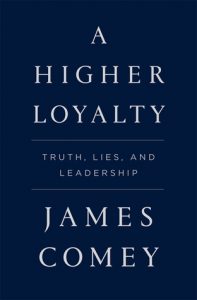 Background
In December, 2016 the Central Intelligence Agency (CIA) concluded that Russia intervened in the 2016 election, followed by then-President Obama's order of a detailed review of the Russian cyber-attacks.

On January 6, 2017 seventeen US Intelligence Agencies released a de-classified version of their report concluding that the election was "hacked" by the Russians in an attempt "to harm Hillary Clinton's chances and promote Donald J. Trump."

The Department of Justice's subsequent investigation was led by FBI Director James Comey, as head of the nation's top law enforcement agency, until his abrupt firing by President Trump on May 9th.

The White House officially cited the President's "lack of confidence" in Comey and his "mishandling" of the 2016 investigation into Hillary Clinton's use of a private email server while Secretary of State as the reason (although Trump himself contradicted the statement in an interview with NBC's Lester Holt two days later, admitting it was prompted by the Russian investigation). 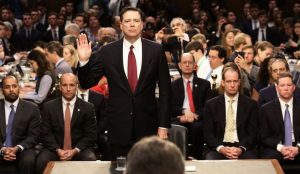 Ironically, it was Comey's actions in the Clinton investigation, and his highly controversial public decision to re-open the investigation just weeks before the presidential election, that is credited by many with delivering Trump the election.

As a subject in the DOJ investigation himself, Trump's intervention in firing the man leading it set off a public firestorm, eventually forcing the hiring of the outside Special Counsel Robert Mueller.

On June 8, 2017 James Comey testified before the Senate Intelligence Committee, which was conducting one of three official investigations into  the Russian government's efforts to influence the outcome of the 2016 presidential election and the role of Trump associates in that effort.

In his testimony Comey made it clear that there was more to be revealed about the ties of Trump's "associates" to the Russia probe, and flatly stated that the President's "lied" about his initial public reason for firing him.

Prologue
Comey apparently kept meticulous notes of his interactions with the President, now the foundation of the Higher Loyalty book, which will be publicly released next Tuesday. Comey, who is respected by those who served with him at the FBI, appears to be raising a moral and legal case for the instability and "unethical" character of our Commander in Chief.

In sometimes surprisingly personal commentary, Comey provides greater detail on his interactions with the President -- from Trump's attempt to secure a pledge of loyalty from him, to requests to end the investigation, to several requests from the President asking Comey to investigate the potentially damaging "golden showers thing" in the private Steele Dossier.

Among the more disturbing narratives is Comey's comparison of Trump to a mob boss in how the President sees himself, and the way in which he operates - arrogantly above the law and ready to immediately dispose of (fire) any in his inner circle who are disloyal. 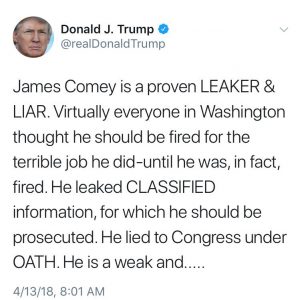 Given the number of subsequent senior administration officials that have exited the White House in the last year, including many who are now on the Special Counsel's interview/witness list, we can expect many more books.

For Comey, however, this is most likely just volume one.

June 28, 2019 The second night of the first round of the Democratic presidential debate proved a very different dynamic, elevating the playing stage to direct and contentious debate between the...

August 14, 2018 The Old-Age, Survivors, and Disability Insurance (OASDI) program, otherwise know as Social Security, turns 83 years-old today. Its future, however, like many of the benefits for...