In February of 1968, Dr. Martin Luther King, Jr. joined sanitation workers on strike in Memphis, Tennessee to protest discrimination, low pay and inhumane conditions that led to the gruesome death of two workers on the job.

His mission, like those who will be rallying across the country this weekend, was to demand dignity, equal rights and freedom from social and economic oppression for working people.

Now 50 years later, we are in serious and very real danger of turning back the clock on all that Dr. King and many others fought for - as the US Supreme Court prepares to hear the Janus v. AFSCME Council 31 case. 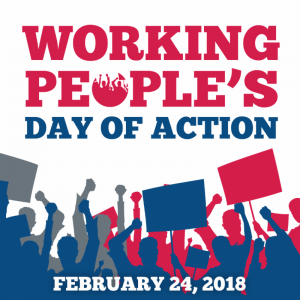 The case is aimed at weakening workers' freedom to join a union, and their right to organize and bargain collectively for better pay and benefits.

The case is also a culmination of decades of efforts to oppress fundamental freedoms of all working people, and another extension of the attacks upon minorities and the underprivileged under the Trump administration.

To send a message to the decision makers - the politicians, the administration and the courts - join fellow citizens nationwide in rallying for action this Saturday, February 24th.

Following the DC rally, join local unions for a teach-in across the streetat the Wilson Building to learn more fighting for the future.

Join DemList and others this Saturday.

Because when we join forces and stick together, we are unstoppable.