The fifth and final meeting of the Unity Reform Commission of the Democratic National Committee (DNC) met December 8th and 9th in Washington, DC, concluding with their nearly unanimous recommendations for significant changes to the presidential nominated process.

Chaired by Jen O'Malley Dillon and Vice Chair Larry Cohen, the Commission is made up of 21 members selected by Secretary Hillary Clinton, Senator Bernie Sanders and DNC Chair Tom Perez. 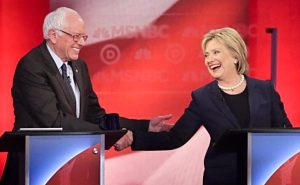 Commission created as a Clinton-Sanders compromise on nominating process

Major Recommendations
*   Reduce the number of unpledged delegates or 'superdelegates' by approximately 60%, from 715 to 315, with the votes of the remaining delegates tied to the results of their state.
*   Institute absentee voting as an option in presidential caucuses.
*   Institute same-day party affiliation switching and same-day voter registration in all 50 state presidential primaries.
*   Mandate public reporting of raw vote totals from caucus states.
*   Institute new accountability mechanisms for the party's budget, including joint fundraising agreements and contracts with outside vendors and consultants.
*   Establish a seven-member Ombudsmen Council including the DNC's four regional Caucus Chairs.

The commission must issue its final report to the DNC Rules and Bylaws Committee no later than January 1, 2018, which will then have six months to amend party rules to adopt the recommendations before the members of the DNC vote on their formal approval at their 2018 fall meeting (two-thirds required). 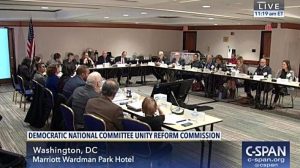 The Unity Commission's recommended reforms were applauded by the more progressive Sanders wing of the party, which felt disenfranchised by the 2016 primary battle and process, and have pushed for accountability on DNC Chairman Tom Perez' promise to rebuild a more inclusive Democratic Party.

"Ultimately, we have the potential to have a Democratic Party now that reflects the will of the people, and the people will be able to understand what's happening on the inside. This is about being the people's party again." -- Nomiki Konst, Sanders appointee to Commission