Campaign workers are the latest professionals to unionize, with numbers that, if recruited successfully, could add significantly to the ranks of organized labor.

While thousands of campaign workers, organizers and field directors are employed full time over a two-year election cycle, over 50% are hired in the last six months, making them an unlikely target for organizing. 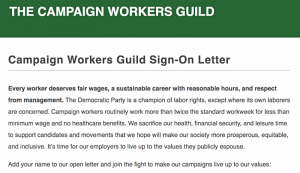 However, a new group, the Campaign Workers Guild (CWG), aims to change that mindset as the first labor union founded to organize political campaign workers.

Labor unions represent workers in many industries recognized under US labor law -- in collective bargaining over wages, benefits, and working conditions, in management and discrimination disputes, and over contract violations. Unions also typically engage in lobbying and political electioneering at the state and federal level.  10.7% of US workers belong to a union.

The CWGs goal is a collective bargaining agreement that would cover all Democratic campaigns for local, state, and federal office. It will also cover those working for progressive ballot measures.

Those seeking to join the high energy, high stakes environment need to demonstrate, upfront, a commitment to the cause and the right connections to get through the door. Many often volunteer full-time first to distinguish themselves amongst the hundreds of resumes being considered for one of a few slots.

Although campaigns have increasingly offered more benefits like health insurance, and compensation for phone and housing, only a few have collective bargaining representation. Among them, the Vermont Democratic Party, which last year affiliated with the United Steelworkers Union.

Although a non-partisan entity, the Campaign Workers Guild was formed in October of 2017 by a group of alumni from the Bernie Sanders' presidential campaign.

Since they launched in February, CWG has unionized workers from 20 campaigns and one firm. The list includes Randy Bryce (Candidate, WI-1), Deb Halland (Candidate, NM-1), Laura Moser (TX-7) and Congresswoman Pramila Jayapal (WA-07), as well as the Ohio Democratic Party.

Although some are skeptical of CWG's ultimate success, others think that, given the Democratic party's close ties to labor, it is time to "practice what we preach." 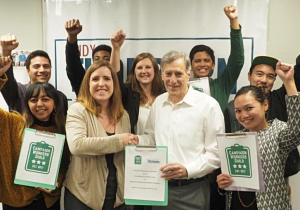 "The progressive movement needs to live up to its values. We have to treat our organizers with respect and dignity."  -- DNC Deputy Chair and Congressman Keith Ellison (MN)

December 21, 2020 The Presidential Inaugural Committee (PIC) has released more details on the inaugural festivities surrounding the historic inauguration of Joe Biden and Kamala Harris as our 46th...

June 10, 2020 Voters in five states went to the polls yesterday, with the presidential at the top of the ticket in Georgia and West Virginia, and the regularly scheduled primaries for...