In less than 24 hours, the Russian Federation is expected to invade Ukraine, one of 15 republics that seceded from the Soviet Union in 1991. 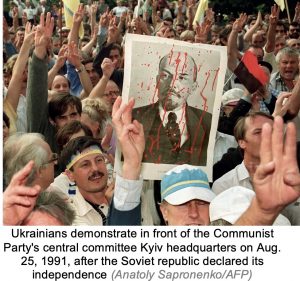 Less than 13 months into his term and just eight months since he ended "America's Longest War" in Afghanistan, President Joe Biden is balancing concerns about leading the United States into a new war as an international security crisis with Russia plays out, now hourly, on the world stage.

To understand what brings us to this place in history, one must first understand the battle for Ukraine's independence and its struggle between the West and East over the last thirty years.

Understanding Ukraine: The Timeline
1991
From 1989 to 1991, strong nationalist and separatist movements sweep throughout central and Eastern Europe, ending with the dissolution of the Union of Soviet Socialist Republics (USSR) on December 26, 1991.

Months earlier, on August 24, 1991, the Ukrainian parliament, officially called the Verkhovna Rada, adopts the Act of Independence, which is approved by 92.3% of the voters as the Act of Declaration of Independence on December 1, 1991.

The same day Leonid Kravchuk, leader of the Ukrainian Socialist Soviet Republic, is elected as the first president of Ukraine, the second-largest country by area in Europe after Russia. 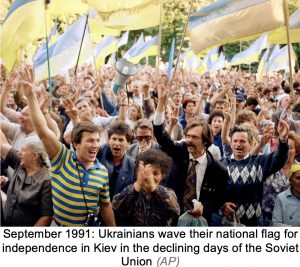 1992-1994
Following its independence, Ukraine declares itself a neutral state, forming a limited military partnership with Russia and other Commonwealth of Independent States (CIS), while also establishing a partnership with the North Atlantic Treaty Organization (NATO) in 1994.

December: In a treaty called the Budapest Memorandum, Ukraine, home to the world's third-largest nuclear stockpile, strikes a nuclear disarmament agreement with the US, the UK and Russia.

1994 to 2004
Kuchma's 10-year term is credited with transitioning Ukraine from a Soviet republic to a capitalist society, but is marked by corruption, including 1999 election-rigging and a 2000 scandal over the ordered death of a journalist. 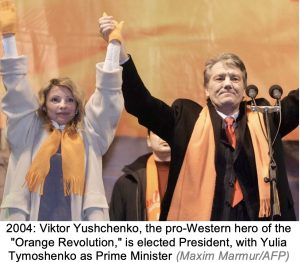 Doctors confirm that Yushchenko, who fell mysteriously ill in the final months of the campaign, has been poisoned. Massive protests follow, known as the Orange Revolution, forcing a rerun of the vote.

2008
Yushchenko, with the support of US President George W. Bush, tries to bring Ukraine into NATO, but France and Germany oppose it after Russia voices displeasure. In a compromise, NATO promises that Ukraine will one day be a member of the alliance.

2010
In February, Yanukovich fends off a challenge by Yulia Tymoshenko, his former prime minister, in the presidential election. He again declares Ukraine a "neutral state," cooperating with both Russia and Western alliances. 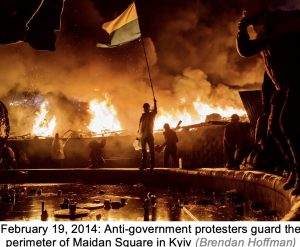 2013: November: Yanukovych refuses to sign a free trade agreement with the EU, opting to revive economic ties with Moscow -- triggering months of mass protests in Kyiv.

2014
February 19: Violence erupts in Kyiv’s Maidan Square between police and anti-government protestors, who call for the ouster of Yanukovych over corruption and the abandoned trade agreement. The Maidan Revolution left more than 100 dead in the single bloodiest week in Ukraine's post-Soviet history.

The Ukrainian parliament votes to impeach Yanukovych, who flees to Russia. The Rada votes to remove Yanukovych, charges him with the mass murder of the Maidan protesters and installs an interim government.

March 6: With Russian troops in control, the Crimean parliament votes to secede from Ukraine and join Russia. A March 16 public referendum follows, with a widely disputed 97% of residents in favor of secession. 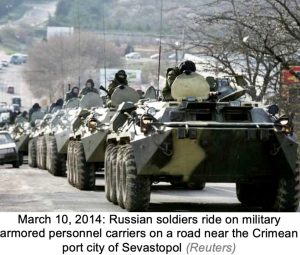 March 18: Putin announces the Russian annexation of Crimea. It remains the only time that a European nation's borders are changed by military force since World War II.

March 24: The US and other leaders of the G8 industrialized nations impose sanctions on Russia and remove it from the bloc, now known as the G7. The annexation is declared illegal in a resolution by the UN.

April: With some 40,000 Russian troops on Ukraine's eastern border, pro-Russian separatists in the region of Donbas declare independence. The violence continues until September when Ukraine and Russia signed the first Minsk agreement, a ceasefire that is soon broken.

May: Pro-West politician Petro Poroshenko, a former government minister and head of the Council of Ukraine's National Bank, is elected Ukraine's president on a reform, anti-corruption and energy independence platform. 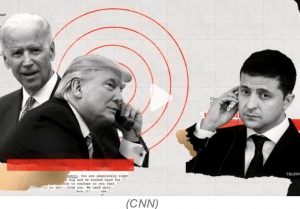 2019
April: Actor and comedian Volodymyr Zelensky is elected president of Ukraine, vowing to make peace with Russia and end the war in the Donbas.

July: On a phone call with US President Donald Trump, Zelensky asks for a meeting about US backing of Ukraine's efforts to push off Russia. While freezing $400 million in security aid for Ukraine, Trump asks Zelensky for "a favor": an investigation into energy company Burisma Holdings and the Bidens. A White House whistleblower complains, leading to Trump's first impeachment in December 2019.

August: In a White House meeting with Zelensky, President Joe Biden, elected in November, reiterates the US' commitment "to Ukraine's sovereignty and territorial integrity in the face of Russian aggression."

2022
January 2: In a call with Zelensky, Biden promises that the US and allies will act "decisively" if Russia further invades Ukraine. 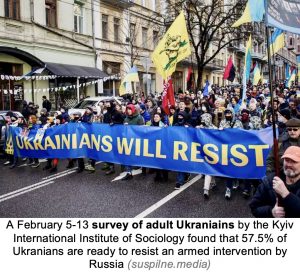 January 10: US and Russian diplomats, meeting in Geneva, fail to narrow differences on Ukraine.

January 14: A cyberattack warning Ukrainians to “be afraid and expect the worst” hits government websites.

January 23: The US State Department orders the families of embassy staff to leave Ukraine. NATO places forces on standby the next day, including 8,500 US troops.

January 26: The US and NATO deliver their written responses to Putin's demands, stating they cannot bar Ukraine from joining NATO but signal a willingness to negotiate over smaller issues like arms control. 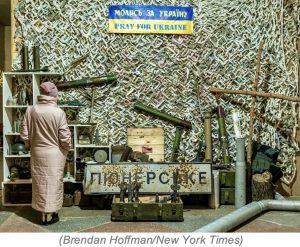 February 2: The US announces the deployment of 2,000 troops to Poland and Germany and 1,000 more to Romania.

February 7: Over the next week, both French President Emmanuel Macron and German Chancellor Olaf Scholz meet separately with Putin in Moscow.

February 11: The US and the UK urge their citizens to leave Ukraine. Biden announces the deployment of another 2,000 troops to Poland.

February 15: Ukraine reports a cyberattack against its Ministry of Defense and Banks. Russia has over 150,000 troops circling Ukraine and Belarus and along Ukraine's border. 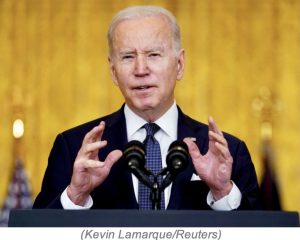 Russia's Defense Minister announces that some military units are leaving their positions near Ukraine after completing military exercises. This afternoon, however, President Biden stated that the US has no verification of such actions and "indeed, our analysts indicate that they remain very much in a threatening position."

In a 3:30pm press conference today, Biden, speaking to the American people, and at times pointedly to the Russian and Ukrainian people, said, "An invasion remains distinctly possible."

Biden said he and President Putin agree that giving diplomacy "every chance to succeed" is critical, but reiterated that Russia will face "powerful sanctions" by the US and its NATO allies if it launches a military attack against Ukraine.