At 9:45pm US Eastern time last night (5:45am Thursday in Moscow), Russian President Vladimir Putin announced that "a special military operation" had begun in Ukraine, marking his country's declaration of war against its neighbor and formally launching the most serious international crisis in decades. 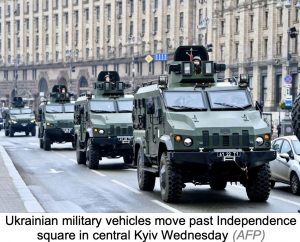 The full invasion was a culmination of months of military buildup surrounding Ukraine and its eastern border along the Donbas region. The area has been the site of violent conflict with pro-Russia separatists regimes since the Maidan Revolution and Russia's illegal annexation of Crimea in 2014, killing more than 14,000 people over the last eight years.

On Monday, February 21, following a rambling 45-minute speech detailing his revisionist history of Russia and Ukraine, Putin decreed the "independence" of the separatist "breakaway" territories of Donetsk and Luhansk in Donbas. Hours later he ordered Russian forces into the region for "peacekeeping" purposes.

On Tuesday, President Biden announced immediate sanctions by the United States and its NATO allies which far exceeded the measures taken by the US after Russia annexed Crimea. 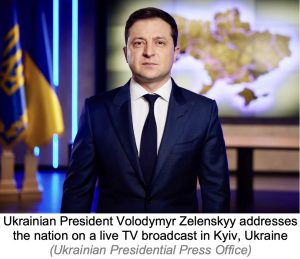 Undeterred, Putin, who believes Ukraine is an illegitimate country that historically and geographically belongs to Russia, pushed beyond Donbas to Ukraine's capital city of Kyiv Wednesday night.

Hours before Ukrainian President Volodymyr Zelensky addressed the Ukrainian, then Russian people, saying "They told you that Ukraine is posing a threat to Russia. It was not the case in the past, not in the present, it’s not going to be in the future." In the impassioned and ultimately unsuccessful plea, Zelensky begged Russian citizens to help stop the war "now, before it is too late."

The attack, which hit Kyiv locally in the early hours of Thursday, began with missiles raining down across Ukraine, striking military installations and air-defense targets. Medium-and short-range ballistic missiles were also launched from warships in the Black Sea. 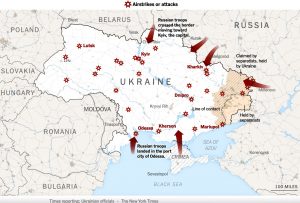 The highway heading west out of Kyiv was choked with traffic as an estimated 100,000 Ukrainians fled their homes.

In addition to Kyiv, reports of explosions or gunfire came in from several other cities across Ukraine.

Russian troops and tanks moved across the Ukrainian border in several waves, landing in the port city of Odessa in the south and across the borders from Russia and Belarus to the north and east.

On the first day of fighting, 127 Ukrainian soldiers were killed and over 360 injured.

US and NATO: Retribution
This afternoon, saying "Putin chose this war and now he and his country will bear the consequences," President Biden announced a new list of sanctions imposed by the United States and the 30-nation block that comprises the North Atlantic Treaty Organization (NATO). 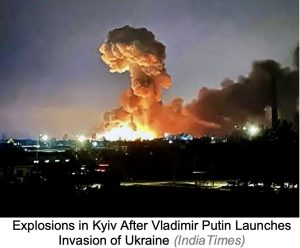 The sanctions, as described by the White House, "include sweeping financial sanctions and stringent export controls that will have a profound impact on Russia’s economy, financial system, and access to cutting-edge technology."

* Severing the connection to the US financial system for Russia’s largest financial institution, Sberbank, including 25 subsidiaries.
* Full blocking sanctions on Russia’s second-largest financial institution, VTB Bank (VTB).
* Full blocking sanctions on three other major Russian financial institutions: Bank Otkritie, Sovcombank OJSC, and Novikombank.
* New debt and equity restrictions on thirteen of the most critical major Russian enterprises and entities.
* Additional full blocking sanctions on Russian elites and their family members.
* Sweeping restrictions on Russia’s military to strike a blow to Putin’s military and strategic ambitions.
* Russia-wide restrictions to choke off Russia’s import of critical technological goods.
* Historical multilateral cooperation that serves as a force multiplier in restricting more than $50 billion in key inputs to Russia - impacting far more than that in Russia’s production. 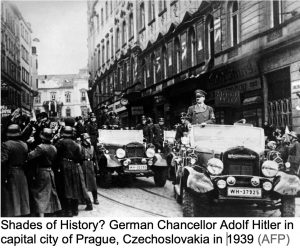 Shades of History
Putin's actions pave the way for what many now fear may be a determined path to regain control of other former republics of the Union of Soviet Socialist Republics (USSR), which was dissolved in 1991.

It is no surprise that analogies have been drawn to a similar path taken by German Chancellor Adolf Hitler in 1939 when he seized the Sudetenland region of Czechoslovakia on its border, claiming that millions of ethnic Germans were being persecuted there.

Although Hilter declared “It is the last territorial claim which I have to make in Europe,” within six months he had taken control of the rest of Czechoslovakia, and on September 1, 1939, attacked Poland, starting World War II.

February 14, 2019 DemList is at the Democratic National Committee’s Winter Meeting in Washington, DC, and will continue to update you daily on developments with the party and the players...