On May 17, 2022, the United States House Permanent Select Committee on Intelligence's (HPSCI) Subcommittee on Counterterrorism, Counterintelligence and Counterproliferation (C-3) held the first public congressional hearing into UFO sightings in over 50 years. 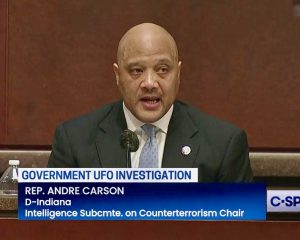 From 1947 until 1969, the United States Air Force, in cooperation with US intelligence agencies, conducted Project Blue Book in an effort to catalog and understand sightings of objects in the air that could not be otherwise be explained -- known as UFOs.

The formal effort ended on the recommendations of The Condon Committee, a University of Colorado UFO research project under the direction of physicist Edward Condon. that was funded by the US Air Force. The Committee's Final Report said the study of UFOs was unlikely to yield major scientific discoveries.

While multiple investigations into individual events have since taken place, it was not until 2017 that the US Department of Defense quietly restarted a similar organization tracking what are now called UAPs. in 2021, Congress rewrote the charter for that organization, now called the Airborne Object Identification and Management Synchronization Group (AOIMSG).

"Today, we will bring that organization out of the shadows," said C-3 Committee Chair André Carson (D-IN) last Tuesday. "This hearing and our oversight work has a simple idea at its core: unidentified aerial phenomena are a potential national security threat. And they need to be treated that way. 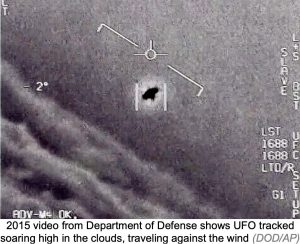 "For too long, the stigma associated with UAPs has gotten in the way of good intelligence analysis...DOD officials relegated the issue to the back room, or swept it under the rug entirely, fearful of a skeptical national security community. Today, we know better. UAPs are unexplained, it’s true. But they are real. They need to be investigated. And any threats they pose need to be mitigated."

Bray reported that the intelligence community has “seen an increasing number of unauthorized and or unidentified aircraft or objects”, which he attributed to improved detection systems, an increase in drones and other non-military unmanned aerial systems, and "aerial clutter" such as Mylar balloons as causes.

A database of reports of UAPs now includes about 400 incidents, up approximately 65% from those assessed in a 2021 report. 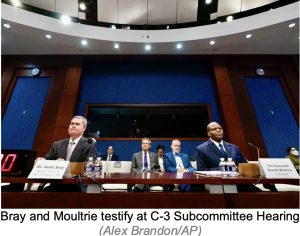 Bray emphasized that they still have not uncovered anything "non-terrestrial in origin," even though there are incidents they can't explain. There was no communication with the documented objects as they all appeared to be unmanned.

The 2021 report, released by the Office of the Director of National Intelligence and largely compiled by the military, catalogs 143 aerial phenomena for which there is no explanation, dating back to 2004.

Many of the latest entries do not have sensor data as they were from people just now coming forward with older stories, said Bray, adding that is evidence that the military's drive to destigmatize such reports and encourage more pilots to come forward is working. "Navy and Air Force crews now have step-by-step procedures for reporting UAPs on their kneeboard, in the cockpit."

As an example of the challenges involved in identifying UAPs, Bray showed a 2021 video of a split-second image, shot through the window of an FA-18 fighter jet, of a spherical object in the distance. The pilot also reported observing the object, which still remains a mystery. 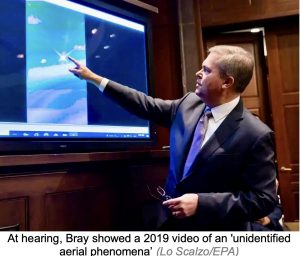 Recognizing the competing interests of public transparency and national security, Moultrie said, "Our goal is to strike that delicate balance -- one that will enable us to maintain the public's trust while preserving those capabilities that are vital to the support of our service personnel."

“We do not want potential adversaries to know exactly what we’re able to see or understand, or how we come to the conclusion,” Bray added. “Therefore, disclosures must be carefully considered on a case-by-case basis.”

The ranking Republican on the C-3 Subcommittee, Rick Crawford (AR) stressed transparency of process, saying that failing to identify the UAPs was "tantamount to an intelligence failure," and the search is "not about finding alien spacecraft...The intelligence community has a serious duty to our taxpayers to prevent potential adversaries such as China and Russia from surprising us with unforeseen new technologies.”

In the 2021 report, investigators found no evidence that the sightings represented a major technological advancement by a foreign adversary, and Bray on Tuesday ruled out a foreign adversary possessing technology consistent with the movements of the unexplained citings.

As Carson brought the hearing to a close he noted to his Democratic and Republican colleagues that the topic of “UAPs and UFOs” is “one of the few times we can demonstrate some degree of bipartisanship.”

The Committee then moved into a closed-door, classified session.