Indiana has no notable footmarks in the history of presidential elections, but that changed yesterday.
The State of the Republican Race
Trump's sweep of the state's 51 delegates brought him to 1,047, just 190 short of the 1,237 needed to secure the nomination. More significantly, it made victory mathematically impossible for Ted Cruz, who reluctantly suspending his campaign last night, acknowledging "We gave it everything we've got but the voters chose another path."
John Kasich followed suit today, leaving Trump the last man-standing and forcing the painful reality on a severely fractured Republican party that he will be their nominee.
It's not over until it's over
... and it is. Delegates are required to vote as pledged on the first ballot at the convention, which means there is no possibility of a brokered convention or final recourse for an alternate nominee.
While the numbers assure Trump's ascension to the GOP throne, the presidential primary process will still continue through the nine remaining Republican primaries, culminating in the final round of 5 states June 7th - when The Donald is expected to officially reach the magic 1,237. 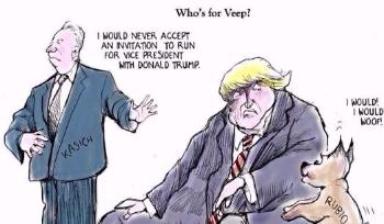 What next?
While the Dems fight a two-front war for another month, the Republicans can turn to the internal mending and VP selection process.
While it is hard to imagine a smiling Marco Rubio next to Trump, he may still be as a consideration, along with Kasich and Chris Christie. Trump supporter and swing-state Florida Governor Rick Scott is a top contender on most lists, as is New Mexico Governor Susanna Martinez (see DemList's Veepstakes).
There may also be implications for the remaining congressional and gubernatorial primaries in the nine states where republicans have yet to vote -- where the lack of competition in the presidential could play a role in voter turnout, or lack thereof.
Of those, eight will hold their congressional, and three their gubernatorial primaries, on the same day.
Republican challengers who are placing their hopes on the new class of anti-establishment voters that Trump has brought to the polls, could lose out if enough of those same voters stay home having already won their battle.
REMAINING REPUBLICAN PRIMARY CALENDAR

In a year like this, anything could still happen. Tomorrow -

the state of the Democratic race!
DemList
Connecting you to The Party
Connecting you to Each Other
Kimberly Scott
Publisher
Please help DemList with a Contribution Today and Contact us for advertising options.

February 15, 2019 While the rest of Washington grappled with President Trump’s declaration of national emergency in his quest for wall funding, members of the Democratic National...

February 26, 2019 As a daily political column and site, DemList is dedicated to informing and connecting our readers, allies and the larger democratic family to the resources needed to be...