While Republicans battle the covert controversy and chaos that has marked the first two months of the Trump presidency, Democrats, by contrast, are countering with a very public campaign to engage and energize the electorate in their new vision for the country.

Democratic National Committee Chair Tom Perez, who was elected one month ago at the DNC Winter Meeting in Atlanta, waisted no timing in sending a unifying message by immediately tapping chief opponent Keith Ellison (D-MN) as Deputy Chair.

Now the two Chairs will hit the road Friday, March 24th to kick off their "Democratic Turnaround Tour" and strategy for unifying, organizing and rebuilding the Party's infrastructure nationwide.

The "buddy" tour will focus on battleground states with pivitol 2017 races, will capitalize on Trump's growing negatives amongst voters, while pushing for a positive economic and proactive message in response to Trump's policies.

At each stop, the duo will meet with local party members to talk about the importance of local organization - a key point in both of their campaigns for the chairmanship.

The tour will begin with stops in Detroit and Flint, Michigan, before moving on to New Jersey, Texas, and Virginia.

In 2016 Democrats lost Michigan, a perennial presidential battleground state, for the first time in 28 years.

Virginia and New Jersey come ahead of marquee 2017 gubernatorial races in both states, including the chance to flip the New Jersey seat being vacated by incumbent Republican Governor Chris Christie.
Republicans hold 33 of the country's Gubernatorial seats to Dem's 16 (and one independent, Alaska).

In Texas, which hasn't voted Democratic in a presidential since 1976 (Jimmy Carter), Democrats continue to chip away at the former Republican stronghold as demographic trends edge it closer to a swing state. 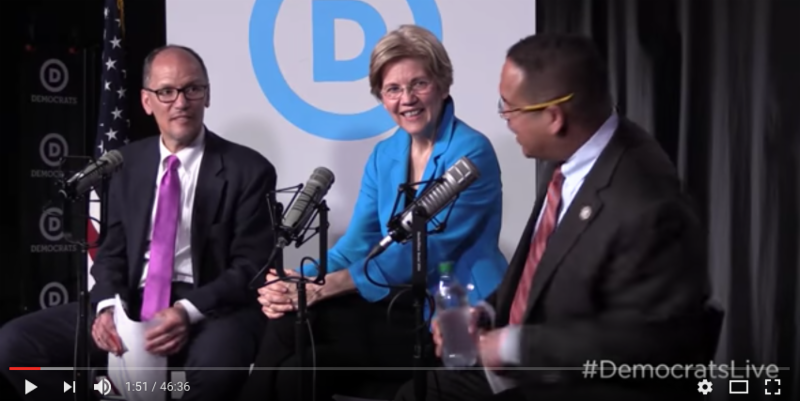 Ellison and Perez are also focused on increasing support for all 50 states and the territories - a strategy similar to that of former DNC Chair and presidential candidate Howard Dean.

To further underscore transparency and grassroots participation, Perez and Ellison have also launched a weekly series called Democrats Live, in which they address current issues, party strategy, and take in viewer questions.

As noted by Perez, the program will include "robust discussions with leaders who are focused on turning this moment of progressive energy into a sustained movement for electoral gain."

For a list of new DNC officers: DemDaily: A New Direction

A pause from the current history-in-the-making – for reflections on a proud American history. February is Black History Month, honoring the contribution of Black Americans throughout...