Tuesday's primaries in Alaska and Wyoming put us past the halfway point in the primary season. 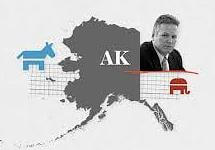 Highlights
In the Alaska Governor's race, incumbent Independent Governor Bill Walker, who first won in 2014 with Democratic support, is seeking re-election. Walker, the only Governor not associated with a major political party, is facing opposition from former US Senator Mark Begich, who was unopposed in last night's Democratic primary.

On the Republican side Walker and Begich will be competing against Mike Dunleavy, who emerged the victor with 61.8% in a seven-way primary.  Dunleavy, a former State Senator, is given the edge in the general election, but the race is a top target for the Democratic Governor's Association and rated a "toss-up" by many pundits.

William Toien, a Libertarian, is also running in November.

In Alaska's one at-large Congressional District, Republican incumbent Don Young, who has held the seat since 1972, is up for re-election. He faces education advocate Alysa Galvin who, like over half of the state is an Independent, but because of Alaska's unique election laws, was able to run in the Democratic primary as well.

Highlights
Senator John Barrasso, first elected in 2006, swept past five Republican primary challengers to secure his re-election bid.  He will be challenged in November by businessman Gary Trauner, who was unopposed in the Democratic primary.

Sitting Governor is Matt Mead (R) is term-limited, leaving a setting up an scramble among a half dozen Republicans to be his successor.  State Treasurer Mark Gordon came out on top Tuesday night, defeating GOP megadonor Foster Friess and five others in one of the state's most expensive contests. Gordon will face former State House Representative Mary Throne (D), along with Constitution Party candidate Rex Rammell in November.

Congresswoman Liz Cheney, who was elected to Wyoming's one, at-large Congressional District in 2016, will be challenged by Democrat Greg Hunter in November.