Yesterday's primaries in Kentucky, New York and Virginia underscored the challenges of voting in the age of the coronavirus, and the restlessness of an electorate increasingly hungry for change.

KENTUCKY
The unexpectedly competitive Democratic primary for the nomination to face U.S. Senate Majority Leader Mitch McConnell, is too close to call. 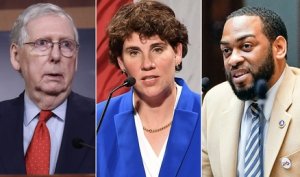 In the primarily vote-by-mail election, where only 10%-15% of the total vote has been counting, retired Marine fighter pilot Amy McGrath is leading State Representative Charles Booker 44% to 38%, followed by Lincoln County farmer Michael Broihier's at 6%.

McGrath, who ran a strong, but unsuccessful race for Congress is 2018, was the undisputed frontrunner until Booker took a lead role in the protests over the high-profile March 13th death of Breonna Taylor, a 26-year-old African-American medical technician killed during a police raid.

Progressives, including Senators Bernie Sanders and Elizabeth Warren, and former Kentucky Secretary of State Alison Lundergan Grimes, have endorsed Booker over the moderate McGrath, who has the backing of the Democratic Senatorial Campaign Committee.

Kentucky is another high-profile test of voting during the pandemic, having postponed its primary from May 19th to June 23rd, and offering, for the first time in its history, no-excuse absentee voting.

Democratic Governor Andy Beshear and Republican Secretary of State Michael Adams jointly agreed to allow vote by mail due to the pandemic, and Kentuckians were allowed to vote in-person as of June 15th.

The subsequent decision to close 95% of the state's polling places, however, including leaving only one location open in Jefferson County, where half of Kentucky's Black voters live, spurred national accusations of voter suppression. 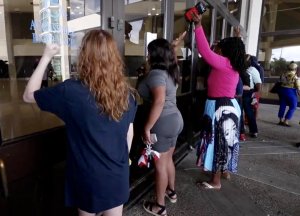 Voters beat on doors after Expo Center polling place closed. A judge allowed those on premises by 6pm another 1/2 hour to vote (Courier-Journal)

Defenders of the plan argued that, in fact, 18 voting locations, normally held in venues too small to social distance, were moved into the Kentucky Exposition Center to allow an estimated 30,000 Jefferson County voters who had not voted by mail or in-person early, to cast their ballots safely.

Conflict erupted, however, when the Jefferson County Clerk's Office closed the doors at the announced 6:00pm, leaving a crowd of about 50 people outside who had been delayed due to parking lines. After an injunction sought by Charles Booker's campaign, a judge ordered the doors to stay open until 6:30pm to allow the remaining voters to cast their ballots.

Final results are not expected before June 30th, or later, when all absentee ballots are counted. Still to be reported are Jefferson County, which includes Booker's hometown of Louisville, and Fayette County, home to Lexington, another Booker stronghold.

The Democratic presidential primary contest was called for Joe Biden, who, as of 5:00pm today, had 57% to Bernie Sanders' 12%. 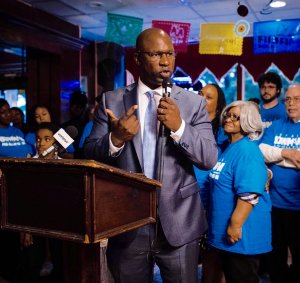 The New York Times endorsed Bowman, saying "promises to work for all of the district" (Corey Torpie)

NEW YORK
The biggest story of the New York Primary was the defeat of 16-term incumbent Elliot Engel in the 16th Congressional District Democratic primary by education advocate Jamaal Bowman.

Bowman, a former principal and founder of the Cornerstone Academy for Social Action, a public middle school in the Bronx, has rallied progressive support at the national and local levels.

He received the endorsements of Senators Bernie Sanders and Elizabeth Warren, as well as New York Congresswoman Alexandria Ocasio-Cortez, who herself defeated a longtime establishment Democratic in 2018 (and who easily defeated a well-funded primary challenger in her 14th CD primary Tuesday).

He has faced criticism, however, as being disconnected from his district, where less than half of its residents are white, one-third are Black, and one-quarter are Hispanic.

Other longtime New York incumbents appeared to have successfully fended off primary challengers, including Congressman Yvette Clarke (9th CD) and Jerry Nadler (10th CD), while four-term Congresswoman Carolyn Maloney's race in the 12th CD is still too close to call. 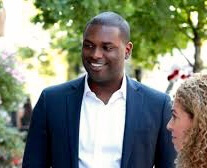 Mondaire Jones, with strong primary lead, is likely headed to Congress in November

In a primary rematch, Maloney is leading with 40.34% to Suraj Patel's 38.75%, but like other primary contests statewide, thousands of absentee votes have yet to be counted. Those ballots will be tabulated on June 30.

In the 17th Congressional District, where Congresswoman Nita Lowey is retiring, progressive attorney and former Obama Department of Justice staffer Mondaire Jones, has a solid lead over seven opponents with 44.8%.

In New York's 27th District Special Election, victory has been called for Republican Chris Jacobs in the contest to fill the House seat vacated by GOP incumbent Chris Collins, who resigned in the fall before pleading guilty to federal insider trading charges. Jacobs, who was endorsed by President Trump, has 68.7% of the vote to Democrat Nathan McMurray's 29.5%.

The Democratic presidential primary contest was called for Joe Biden, who, as of 3:00pm today, had 67.5% to Bernie Sanders' 19%. 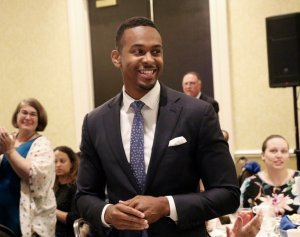 The seat, historically represented by conservative Democrats, has switched parties a few times over the last decade, with incumbent Republican Denver Riggleman being elected in 2018.

The freshman Congressman, however, alienated fellow Republicans in the district with his libertarian stances and his officiating of a same-sex wedding, resulting in his ouster at the GOP state convention earlier this month.

The 5th District, Virginia's largest, covers parts of Central Virginia and includes the cities of Charlottesville and Danville and has now been moved up the ranks of Democrat's top targets.

Next Up: The final presidential primary contests in New Jersey and Delaware on July 7th, Louisiana on July 11th and Puerto Rico on July 12th.