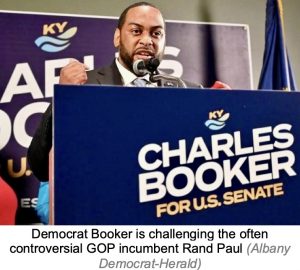 KENTUCKY
US Senate: Former State Representative Charles Booker prevailed in the Democratic primary, besting three other opponents with 73.2% of the vote. The self-proclaimed progressive is challenging two-term Senator Rand Paul, who easily fended off five primary challengers with 86.3%.

In the historically red state that former President Donald Trump won by 26 points in 2020, Booker is making history as the first Black Democrat to be nominated for a statewide office. The last Democrat to represent the Bluegrass State in the US Senate was Wendell Ford from 1974 to 1998.

In the open Third Congressional District begin vacated by the retirement of eight-term Democratic Congressman John Yarmuth, State Senator Morgan McGarvey won the Democratic primary with 63.3%. In the still uncalled GOP primary, less than 50 votes separate businessman Stuart Ray and 2020 Republican nominee Rhonda Palazzo, who has called for a recanvass of the vote. 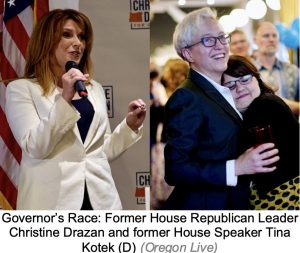 In the Republican primary, former State House Minority Leader Christine Drazan (R) was declared the winner of the 19-candidate field with 23.9% of the vote. With 82% reporting as of Wednesday morning, her closest competitor, corporate consultant Bob Tiernan, came in at 18.4%.  A well-funded unaffiliated candidate, former longtime Democratic lawmaker Betsy Johnson, is also expected to be on the ballot for the general election.

A number of races are still undecided as Oregon’s vote-by-mail system means there are still several days of counting before the results are final. 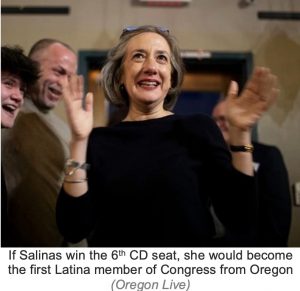 Incumbent Congressman Kurt Schrader appears to have been defeated in the Democratic primary for the Fifth District by attorney Jamie McLeod-Skinner, who, at 49% reporting, has secured 60.5% of the vote to Schrader's 39.5%. With 55% reporting in the GOP primary, Lori Chavez-DeRemer leads Jimmy 42% to 30.6%, followed by three other candidates.

With 83% reporting In the new Sixth District, State Representative Andrea Salinas is comfortably leading the Democratic primary with 36.9%, with the closest of eight other candidates at 18.7%. In the GOP primary for Oregon’s 6th District, businessman Mike Erickson is leading with 35% among a field of seven candidates. 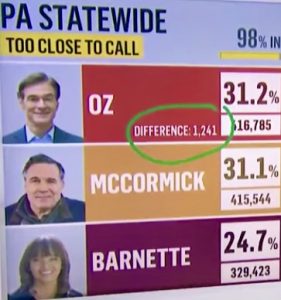 With 98% of vote reported, Oz has garnered 31.2% of the vote to McCormick's 31.1%, with 10,000-15,000 mail-in ballots still to be counted. Under Pennsylvania's election system, mail-in ballots don't get registered and tabulated until election day.

There are also approximately 1,500-2,000 outstanding votes being counted in Alleghany County around Pittsburgh, where technical issues in 31 precincts have prolonged the normal tabulation process, requiring votes to be counted by hand.

Regardless of what happens with the remaining votes, the battleground contest which will be critical in determining ultimate control of the US Senate, will go to a recount. In Pennsylvania, a recount is automatically triggered when the results are within half a percentage point. There is currently just 1/10 of 1% separating Oz and McCormick. Final results of the recount are not expected until June 7th.

The winner will face Democrat John Fetterman, who easily swept his primary with 59%.

Next Up! May 24th Primaries in Alabama, Arkansas, Georgia, Minnesota and Texas