Yesterday's elections solidified Pennsylvania's standing as ground zero for the 2022 midterm elections, with the country's most-watched Senate primary still hanging in the balance.

The results in the Keystone State, as well as those in North Carolina, Idaho, Kentucky, and Oregon, also produced mixed results for those hoping for validation of former President Donald Trump's influence over GOP voters in the primaries. 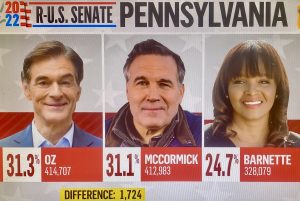 PENNSYLVANIA
US Senate
In the open seat to succeed retiring Republican Senator Pat Toomey, Democrat John Fetterman, who easily swept his primary with 59%, is still waiting to find out whom he will face in November.

In the high-profile GOP Senate primary, Trump-endorsed television celebrity Mehmet Oz and former hedge fund CEO David McCormick are within 1,725 votes of each other, with Oz at 31.3% to McCormick's 31.1%, followed by Kathy Barnette at 24.7%.

With some 32,000 outstanding vote-by-mail ballots yet to be counted, however, the outcome is far from determined. In the critical battleground which may ultimately determine the balance of power in the US Senate, a recount is automatically triggered when the results are within half a percentage point, so this race will be going into overtime. 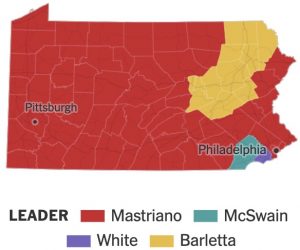 While the nomination of the avowed insurrectionist who received a last-minute endorsement from Trump, puts another feather in the former President's hat, concerns about Mastriano's electability in the general election bode well for Democrats. 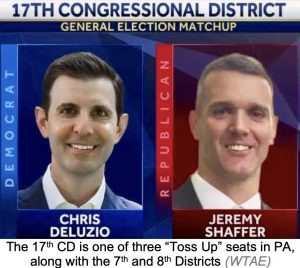 In the Seventh Congressional District GOP primary, Lisa Scheller leads Kevin Dellicker 51.3% to 48.7% in the contest to take on incumbent Democrat Susan Wild. In the Eighth CD, incumbent Democrat Matt Cartwright is set for a rematch with 2020 nominee Jim Bognet (R).

US Senator Tim Tillis (R) and the GOP establishment rallied around Edwards to unseat Cawthorn, the only member to be called out by national Republican leaders for his controversial statements. Edwards will face Buncombe County Commissioner and pastor Jasmine Beach-Ferrara in the general election. 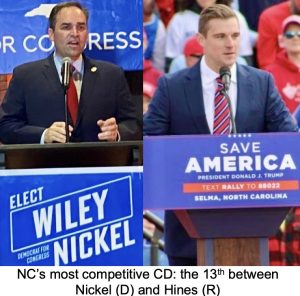 Governor: In the high-profile Republican gubernatorial primary, incumbent Governor Brad Little easily dispatched challenger and Lieutenant Governor Janice McGeachin, 52.8% to +32.2%. The race drew national attention for Trump's early endorsement of McGeachin, considered among the most extreme of the conservatives he is supporting. 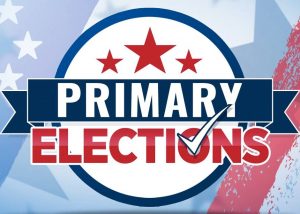 The results of the Democratic gubernatorial primary will not be known for a while. In addition to the sole qualifying candidate on the ballot, former Army National Guard member Stephen Heidt, two other candidates are running write-in campaigns, which must be counted by hand.

In a win for the Big Lie, longtime incumbent Attorney General Lawrence Wasden lost the GOP nomination to former Congressman Raúl Labrador, who attacked Wasden for not joining the lawsuit to overturn the 2020 presidential election. Labrador, who secured 51.5% to Wasden's 37.9%, will face Democrat Boise attorney Steven Scanlin in the general.

In the GOP primary for Idaho Secretary of State, however, Ada County Clerk Phil McGrane prevailed over State Representative Dorothy Moon, 43.1% to 41.4%. McGrane has accepted the results of the 2020 election, while Moon embraced Trump's conspiracy theories about voter fraud.

July 18, 2017    Three months ago, the results of the contentious 2016 presidential campaign were too fresh and painful to start thinking about the 2020 White House contest and potential...