While one Trump-backed candidate prevailed in West Virginia in a high-profile US House race, another failed in Nebraska's statewide gubernatorial primary, handing the de facto party leader his first major loss.

Pillen's victory, boosted by the support of outgoing Governor Pete Ricketts (R), is a major blow to Trump, who carried Nebraska with 58% of the vote in 2020. Trump campaigned in the state for donor-turned-candidate Herbster amid ongoing allegations of sexual misconduct against Herbster by multiple women.

Despite facing six figures’ worth of opposition TV ads purchased by outside groups, Lindstrom, the choice of moderates, out-performed his numbers going into the election.

Pillen will face State Senator Carol Blood, who swept her primary with 88.5% of the vote. Blood was first elected to the Legislature in 2016 after serving on the City Council in Bellevue, an Omaha suburb. 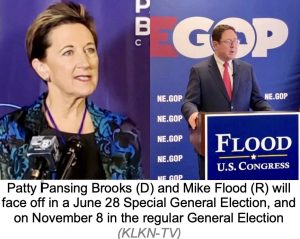 Of note is the result of the Secretary of State GOP primary, where incumbent Bob Evnen, who pushed back on lies about irregularities in the 2020 elections. Evnen fended off two far-right challengers with 43.6% of the vote to Robert Borer's 32.2% and Rex Schroder's 24.2%

Congressional
In the First Congressional District, Republican Mike Flood and Democrat Patty Pansing Brooks will be on the ballot twice for Congress in the next six months.

On Tuesday, they both secured their party’s nomination for the November general election, where the winner will take office in 2023. In the interim, Flood and Brooks will also compete as their party's chosen nominees in a special general election to fill the remaining term of Congressman Jeff Fortenberry, who resigned in March after being convicted of lying to the FBI. 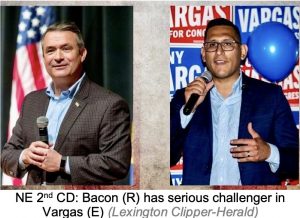 In what may be Nebraska's most competitive race, Bacon is being challenged by State Senator Tony Vargas in the Omaha-based seat that Biden won in the 2020 presidential election.

In the Third Congressional District, eight-term incumbent Adrian Smith (R) will defend his seat against challenger David Else (D).

Mooney was endorsed by Trump, who vowed revenge against McKinley for voting in favor of creating the January 6 Committee. 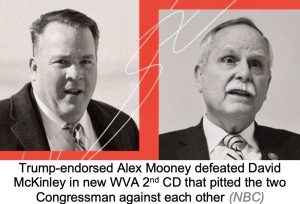 Mooney handily defeated McKinley, who had the support of Republican Governor Jim Justice, 54.2% to 35.6%.

McKinley, notably, also had the support of Democratic Governor Joe Manchin, who actually cut a TV ad for his campaign.

In the First Congressional District, conservative incumbent Carol Miller, first elected in 2018, won renomination with 66.4%. She will face Democrat Lacy Watson, who was unopposed in her primary.

January 20, 2017 Washington, DC was oddly quiet this morning — as if waiting and watching for the impact of today’s Inauguration to become a reality. You could see it in the diverse...