While yesterday's special elections in Wisconsin and California may not have been on the radar screen of the average American, political pundits were watching with anticipation to monitor the mood of the electorate in the early stages of voting in the age of the coronavirus crisis.

Also on the calendar was Nebraska's Democratic presidential primary, which presumptive nominee Joe Biden won with 76.6%, and bringing him to 527 delegates shy of the 1991 needed to secure the nomination. 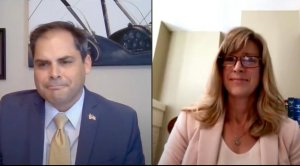 Garcia and Smith debate in online forum in April (YouTube)

Garcia's victory reclaims what is now considered a swing district, which Trump lost by 7% in 2016, and one held for thirteen terms by the GOP until Hill unseated two-term Republican Tony Strickland in 2018.

Just ten months into office, however, Hill resigned after admitting to improper relations with a campaign staffer, putting the seat, where Democrats maintain an edge of about 30,000 voters in party registration, back into play.

In the Southern California district, Democrats have a 30,000 voter registration edge, but Republicans have historically turned out in higher numbers for special elections, and early mail returns seem to reflect that patternin this election.

For both parties, the election was an important test of voter performance in the first competitive election, one conducted primarily by mail, in the pandemic era. However, ballots postmarked by Tuesday and received by Friday, are still being counted.

Democrats have already pledged to pour resources into the November election, when Garcia and Smith are expected to face-off in a rematch to run for a full two-year term, and when Democratic turnout is expected to be considerably higher with the presidential at the top of the ticket. 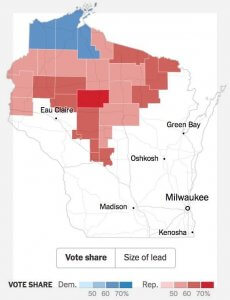 In one of, if not the, most critical battleground state in the 2020 presidential election, the 7th CD, the state's largest, spans parts of 26 northwestern counties.

While the outcome was no surprise in the Republican-gerrymandered district that Duffy held since 2011, measuring the mood of electorate was important following Wisconsin's primary elections last month, when a Democrat was victorious in the country's highest profile state Supreme Court race.

The April 7th primary elections also proved a lesson in chaos and confusion for Wisconsin voters, among the first to cast ballots in the early stages of the coronavirus crisis.

The night before the election, the Republican-controlled legislature and Wisconsin's majority-conservative courts prevailed over Democratic Governor Tony Evers' efforts to postpone in-person voting due to COVID-19 concerns, forcing citizens to choose between safety and their constitutional right to vote.

The ensuring debacle resulted in long lines and closed polling locations, disenfranchisement of minority neighborhoods and voter suppression in the form of thousands of ballots never mailed or received.

In yesterday's mail and in-person election, where National Guard troops were deployed to help operate some of the polling locations, Democrats point to gains in suburban counties, and Tiffany's 14-point margin of victory as an indication of eroding support for President Trump, who won the district by 20% in 2016. 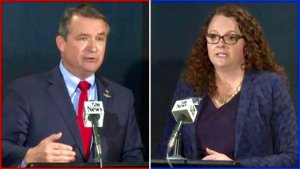 Bacon and Eastman are headed for a rematch (WOWT.com)

Nebraska Primary
Nebraska, which is one of just eight states yet to issue a statewide stay-at-home order during the coronavirus pandemic, held its presidential and down-ballot primary elections yesterday, breaking a near 50-year-old record for most votes cast in a primary.

Despite the challenges of the COVID-19 crisis, and uncontested presidential contests in both parties, an unprecedented 400,000 eligible voters requested an absentee ballot, and a total of 34% of eligible voters turned out to vote.

In the "Red State," which Donald Trump won with 58.7% to Hillary Clinton's 33.7% in 2016, Chris Janicek beat out six other contenders to win the Democratic nomination to take on incumbent Senator Republican Ben Sasse in November.

The most notable contest was in Nebraska's 2nd Congressional District Democratic primary, where Kara Eastman, a progressive and supporter of single-payer health care, handily won the nomination with 62%. Her victory sets up a rematch with first-term Republican Congressman Don Bacon, whom she came within 2% of beating in the swing district in 2018.

SignUp for the Dailys. Follow DemList on Facebook, Twitter and LinkedIn
We are relaying entirely on individual contributions at this time to support our work.  Please help with a $15, $25 or $50 contribution!