This week marks the anniversary of the 1807 trial for treason against former Vice President Aaron Burr, and one of the first tests of the Constitution's Treason Clause.

Since the Constitution went into effect in 1789, treason charges have been brought fewer than 30 times. And Burr's landmark treason trial was one of the earliest, featuring some of the same people who were at the Constitutional Convention.

The Defendent
Burr, who was a founding father and US Senator from New York, won a place on the Democratic-Republican presidential ticket in the 1800 election with then Vice President Thomas Jefferson.

Although the original intention was that Jefferson should be president and Burr vice president, there was a tied vote between the two for the presidency, requiring a final choice by the House of Representatives. 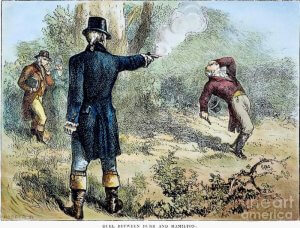 Burr conspired against Jefferson in the runoff in the House, spurring a rivalry between the two that had longlasting consequences. Although Burr was praised for his fairness and his judicial manner as President of the Senate, part of the VP's job, he was shut out of party matters.

When it became clear that Jefferson would drop Burr from his ticket in the 1804 election, the Vice President instead ran unsuccessfully for Governor of New York. Burr blamed his loss on a smear campaign which included the actions of Alexander Hamilton, founder of the Federalist Party, who had also been instrumental in pushing the vote over the top for Jefferson in the 1801 House runoff.

Hamilton's purported comments against Burr resulted in Burr challenging him to a duel on July 11, 1804, in which Burr shot and mortally wounded Hamilton, who died the following day.

Publically shunned by both parties, Burr moved west in 1805 and launched an independent military campaign to seize lands belonging to Spain in Louisiana and Mexico, which included Texas.

Burr originally had enlisted his friend, General James Wilkinson, in the adventure. However, Wilkinson later turned against him, sending a message to President Jefferson that Burr intended to entice the western states to leave the Union and join him in colonizing new lands, with the support of England.

in January of 1807, Jefferson publicly pronounced Burr guilty of treason to Congress and the nation, without a grand jury indictment, and ordered Burr's arrest. 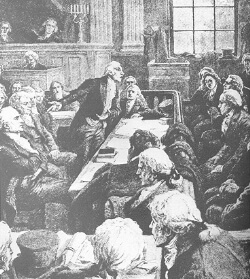 The Players
The dramatic cast of characters involved in Burr's treason trial included many of the individuals who helped write the Constitution itself.

US Supreme Court Chief Justice John Marshall, who was also the federal judge for the U.S. Circuit Court for Virginia, presided over Burr's treason trial. Marshall, however, was a long-time political foe of Jefferson's, and also his distant cousin.

The Trial
After a pretrial examination, Chief Justice Marshall ruled on April 1st that the prosecution failed to produce sufficient evidence of treason. He instead scheduled Burr for trial on the high misdemeanor charge, which enraged President Jefferson, who set out to build the case for treason.

When the trial of Aaron Burr opened in Richmond on May 22, 1807, the prosecution, now armed with new evidence, argued again for treason.

Marshall subpoened documents that from President Jefferson, which was met with opposition by the prosecution, who calimed that as the country's executive, Jefferson was exempt from producing certain classified or privileged documents.

Jefferson also claimed "executive privilege" in deciding what documents, and which part of them, might satisfy the demands of justice.

After the court reconvened on August 3rd, the prosecution pinned most of its treason case on testimony by former Burr allies about discussions involving the conspiracy that took place at Burr's defacto headquarters in Blennerhassett's Island, Ohio.

In his interpretation of the Constitution, Marshall instructed the jury that it had to confine its analysis to testimony that "an act of war against the United States" had been conducted on Blennerhassett's Island.

On August 20th Burr, who conducted much of the cross-examination himself, asked the court to halt further testimony on the grounds that he was shown to have been one hundred miles away from Blennerhassett's Island at the time the overt acts charged were to have taken place.

Marshall subsequently ruled, therefore, that Burr could not be found to have committed treason based on the events at Blennerhassett's Island, and the jury returned a not guilty verdict on September 1, 1807.

Prologue
Following the Burr trial, President Jefferson wanted the House to bring impeachment charges against Marshall, but he had failed in a similar attempt in 1805 when the Senate tried another Supreme Court justice, Samuel Chase, after the House brought charges at Jefferson's urging.

As Vice President and President of the Senate at the time, Aaron Burr presided over Chase's trial and acquittal.

After his own acquittal, Burr spent most of the following decade in England, before returning to New York, where in 1833, at age 77, he married Eliza Jumel, a wealthy widow.

Four months later, after realizing Burr was squandering her fortune, Jumel filed for divorce. Her attorney was Alexander Hamilton, Jr. The divorce was finalized on September 14, 1836, the day of Burr's death.