It was a busy weekend for the country, and the ongoing "days of action" in the new world of the new Trump Administration.

Among the 22 Presidential Executive Orders and Memoranda, the Travel Ban on seven majority-Muslim nations has been the most immediately impactful and destructive.

A Presidential Executive Order is a rule or regulation issued by the President that has the force of law.
All Executive Orders are subject to judicial review if they are determined to be outside the powers vested in the President in the Constitution. If that is the case, he will have to go through Congress.

To bring you up-to-date, a breakdown on the whirlwind of legal actions:

The ban was immediately executed, but without coordinating with government agencies and US Airlines, leaving all scrambling to adapt - while detaining travelers from seven countries in airports nationwide.

Trump's order "does not affect the values that this company is built upon - those of diversity, inclusiveness and tolerance." - American Airlines CEO Doug Parker, in a memo to employees

January 28th, Saturday
Protests broke out at JFK International (NYC) and in other cities, and Lawyers descended on major airports to file suits on behalf of the possibly unlawfully detained persons.
The ACLU filed the first major lawsuit, Darweesh vs Trump, on behalf of detainees - two Iraqi nationals detained at JFK.

February 1st, Wednesday
By Wednesday, more than 940 travelers had been detained or removed from flights includes refugees, short-term travelers, and visa-holding legal permanent residents of the United States.

February 2nd, Thursday
District Judge Victoria Roberts, of the United States District Court for the Eastern District of Michigan, ruled in Arab-American Civil Rights League v. Trump that the order did not apply to U.S. permanent residents with legal visas. 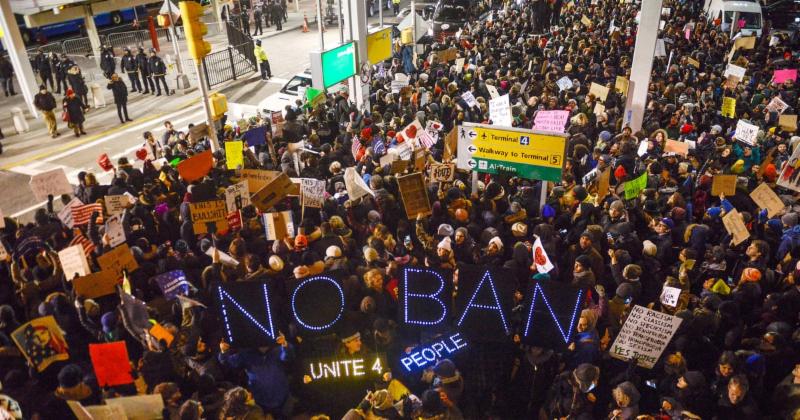 In response, Judge James Robart of the U.S. District Court for the Western District of Washington, issued a nationwide ruling temporarily blocking both the 90-day travel ban from the seven countries, and the 120 day hiatus in refugee admissions.

The Justice Department subsequently filed for an emergency stay to reverse Judge Robart's ruling, but the U.S. Court of Appeals for the Ninth Circuit denied the petition, leaving the restraining order in place.

February 4th, Saturday
The Department of Homeland Security announced that it had stopped enforcing the executive order, and the State Department began the process of re-activating visas suspended since January 27th.

February 6th, Monday
Several former senior US officials, including former Secretaries of State John Kerry and Madeleine Albright, signed a declaration in support of a brief filed by the Attorneys General of Washington and Minnesota.

The brief states that the executive order "ultimately undermines the national security of the United States, rather than making us safer. It could do long-term damage to our national security and foreign policy interest, endangering US troops in the field and disrupting counterterrorism and national security partnerships."

Next Stop: Ninth District & the Supreme Court
President Trump has appealed his case to the San Francisco-based Ninth Circuit Court of Appeals, considered one of the most liberal in the nation. Regardless of the Ninth Circuit's ruling, the losing side is expected to appeal to the U.S. Supreme Court.

If the eight-justice SCOTUS were to split 4-4, the 9th circuit's ruling would be upheld. Trump's Supreme Court nominee, Judge Neil Gorsuch, will not have been confirmed until after the case is heard.

DemList will keep you informed! Pass this on Sign-Up for Daily updates.

Please help DemList keep you informed with a Contribution Today!