On Monday the Trump Administration released its long-awaited infrastructure plan, which on the surface calls for a $200 billion federal investment over the next decade.

One need not even scratch, however, to see the plan is actually a significant reduction in federal infrastructure funds, cutting billions in transportation projects and shifting the financial burden onto states and local taxpayers.

The money is not new, but will come from yet "unspecified budget cuts" and redirected funds, and relies on state and private investments to make up for the additional $1.3+ trillion to fund the much-needed transportation, water and energy system upgrades.

According to the Center for American Progress, Trump's budget proposal, also released on Monday, already details $281 billion in infrastructure cuts.  This includes $3.7 billion from the Department of Transportation, and $2.8 billion from the Environmental Protection Agency and related protections for clean air and water, pollution and health safety.

The Breakdown
$100 billion in competitive grants, to be made available to states and cities. Over a decade that means only $10 billion a year for roads, railroads, airports, water treatment plants, flood control systems and contaminated land cleanups (that is one-tenth of the current annual budget for transportation and water projects alone). 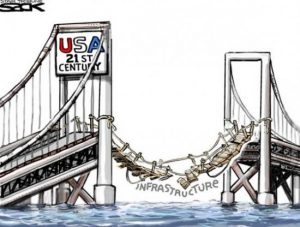 The idea is that the matching grants will generate a rise in state and local infrastructure spending, but ignores the fact that the GOP tax bill nixed the federal deduction for state and local taxes, making local investment less likely.

Currently the federal government finances 80% of major transportation projects, with local governments making up the remaining 20%.  Trump's plan would flip that equation, requiring states and cities to kick in at least $4 for every $1 in federal money they receive.

$50 billion would go toward rural infrastructure, which would benefit Trump's white working-class electoral base.

$20 billion to underwrite private financing of profitable infrastructure projects. Interpretation: a tax giveaway of greater benefit to corporate investors over the projects themselves.

$20 billion for "projects of national significance...that can lift the American spirit, that are the next-century-type of infrastructure as opposed to just rebuilding what we have currently."

$10 billion for a capital financing program that would fund the construction of federal office or government use buildings.

The Alternative
By contrast, the Democrats' "Blueprint to Rebuild America's Infrastructure," unveiled last week, outlines a $1 trillion plan supported by direct government funding -- "real spending and not tax credits that go to the private industry."

The plan would generate more than 15 million jobs through infrastructure repair and building of a "21st century network" of transportation systems, water projects, schools, electric grids and other projects.

Infrastructure has traditionally been a bipartisan issue, but under this White House, and the GOP majority in Congress, however, it becomes another in a long list of futile partisan battles.

In truth, Trump's plan offers no real incentive for either party, nor any answers on how it moves forward.

October 30, 2020 With the unprecedented upending of the electoral process caused by the coronavirus pandemic, and the shift to mail-in voting in the states, the results of the presidential...