President Trump appears to have done an about-face on his approach to the coronavirus pandemic that continues to ravage parts of the country, announcing yesterday that he was cancelling the planned in-person portion of the Republican Convention celebration in Jacksonville, Florida.

"We won't do a big, crowded convention, per se - it's not the right time for that," Trump said to reporters in the White House briefing room. 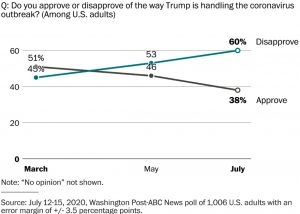 On June 11th, the Republican National Committee announced that Trump's renomination speech and other grand convention festivities would move to Jacksonville, Florida, after state officials in North Carolina refused to go along with Trump's demands for a crowded large-scale event in Charlotte, the original convention site.

Trump has since been urging Florida and other states to reopen their economies and return to normal public life, despite warnings by public health officials and leaders in his own party, some of whom have announced they would not attend the convention due to the dangers of such a large gathering.

As Florida's COVID cases spiked to over 400,000, however, including almost 30,000 new cases over the last 72 hours, Trump backed down -- acknowledging, at last, the health risks. 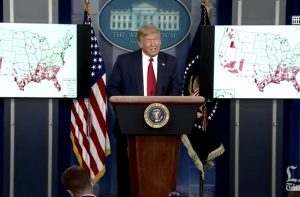 In the news conference, Trump stated that the August 24-27 GOP Convention will begin in Charlotte, "as always been planned," where delegates will still meet in-person, and where they are "going to do other things with tele-rallies and online," and he will still do a convention speech "in a different form."

While Trump admitted that Florida was a "hotspot," his announcement was not a complete reversal. Like a petulant child, he pointed to maps with alleged COVID figures behind him on display, saying that "alot of the country has no problem whatsoever, most of the country actually."

Check Out: The 2020 DemList Convention Calendar, now up and open for free submission of your virtual events, webinars, trainings and caucuses leading up to, and during, the August 17-20 Convention -- now just 24 days away! We are working with the DNCC to post official party activities as they become available.

November 1, 2017 As Congress prepares to go home for the Thanksgiving holiday in a few weeks and, soon after, close out the first session of the 115th Congress, many have aleady shifted their...

January 13, 2020 We are now 182 days away from the Democratic Convention in Milwaukee, Wisconsin — and the selection of our nominee for the 2020 race for the White House. Convention 101  The...