The Fourth US Circuit Court of Appeals court struck another blow to the Trump Administration today, rejecting the second version of the President's controversial travel ban, calling it:

Trump's original January 27th immigration policy order, "Protecting The Nation From Foreign Terrorist Entry Into The United States," which set off protests nationwide, was blocked February 9th by the US Court of Appeals for the Ninth Circuit. 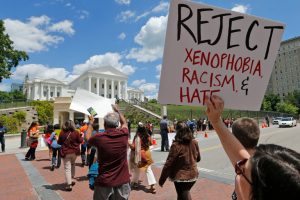 But the nuanced directive would still have banned travelers from Iran, Libya, Somalia, Sudan, Syria, and Yemen from entering the US for 90 days, and all refugees for 120 days.

It also placed an annual cap on admitted refugees to 50,000 (down from Obama's 110,000), and established VOICE (Victims of Immigration Crime Engagement) to publicize reports of terrorism crimes committed by foreigners.

The second order, however, was blocked by the courts just hours before it was scheduled to go into effect March 16th, freezing implementation with a nationwide injunction.

Like so many controversies under his tenture, today's decision comes back to Trump, who has disregarded all traditional forms of diplomactic communication -- tweeting and talking without regard for the consequences.

While a great victory for human rights, it is a temporary one in a battle that many feel will end up in the Supreme Court.

In a separate appeal, the Ninth US Circuit Court of Appeals is also reviewing the revised ban, with a ruling expected soon.

DemList will keep you posted as developments unfold.

April 6, 2021 Several key decisions are expected in the coming months as the Supreme Court of the United States (SCOTUS) enters the final phase of its 2020-2021 term. Among the high-profile cases...