Democrats appeared to have triumphed in both Georgia Senate Runoff elections last night - delivering what is expected to be two astounding victories and, with them, control of the United States Senate.

While the networks have called the race for Democrat Rafael Warnock in the Senate Special Runoff, victory has not been called yet for Democrat Jon Ossoff in the Senate Runoff. Outstanding votes, however, are expected to widen Ossoff's lead. 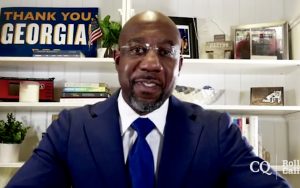 Warnock: "We have a choice to make. Will we continue to play political games as people suffer or will we win righteous fights together? (Click)

The turning point at close to midnight last night, when Warnock flipped from behind to a 32,000+ vote lead over incumbent Republican Kelly Loeffler after a bulk of votes came in from the heavily Democratic Dekalb County.

Reverend Warnock, who is Pastor of Ebenezer Baptist in Atlanta, one of the world's most famous pulpits, will be the state's first African American Senator, and its first Democratic Senator since 2005.

Speaking on a livestream at 12:30am, Warnock, said, "My roots are planted deeply in Georgia soil.

"So, I stand before you as a man who knows that the improbable journey that led me to this place in this historic moment in America could only happen here." 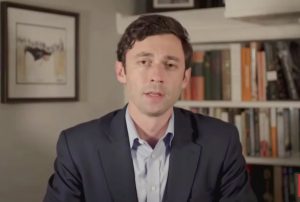 Ossoff trailed incumbent Republican David Perdue through most of the night until late counts from the predominantly Democratic counties of Dekalb, Fulton and Chatham put him in the lead at 2:00am.

In a press briefing this morning, Gabriel Sterling, a Republican and Georgia's Voting Systems Implementation Manager, said an estimated 60,000 absentee, roughly 10,000 provisional and approximately 14,000 military and overseas ballots remain to be counted.

Noting that the absentees were all coming from the heavily Democratic or "blue" counties of Dekalb, Henry, Cobb, Fulton and Gwinnette, Sterling said he expects Ossoff to prevail by a margin of greater than 0.5%, which would prevent Perdue from requesting a recount.

When asked to what he attributed the vote, Sterling, who has condemned Trump's false claims of voter fraud, said, "while Republicans were a bit busy attacking the Governor and my boss, the Democrats were out knocking on doors and getting people to turn out to vote."

The Georgia secretary of state's office requested all counties get their ballots tallied by 1:00pm today.

The Count & Chaos
This afternoon at 1:00pm, the House and Senate met in a joint session of Congress to count and certify the votes cast by the Electoral College in the presidential election. 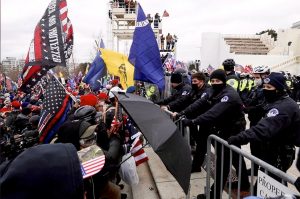 Protestors storm the Capitol an hour ago.

Although normally a pro-forma procedure, 12 GOP Senators and more than 100 GOP House members had pledged to challenge the results with objections, prolonging the process for hours.

The GOP's final effort to disrupt the presidential election, however, were physically interrupted at 2:30pm by protestors, urged on by President Trump in a speech just hours before.

Hundreds of Trump supporters, some with guns, marched to the Capitol and broke through security barriers, necessitating evacuation of most of the Capitol, including the Senate chamber - which is now occupied by protestors.

Mayor Muriel Bowser has called in the national guard and issued a city-wide curfew.

At a time like this, the nation would be looking to the President of the United States to call for a stop to the crisis and chaos. Not instigate it.

DemList will launch the Presidential Inaugural Calendar January 8th!
Sign Up for the Dailys to receive all updates.

January 21, 2018 For our readers — In the event you missed them, three past Dailys of relevance to current political happenings. When a Government Shuts Down * DACA and the Dreamers...