Early voting is underway in every state in record numbers, with already 20% of the electorate nationwide having voted in advance of Election Day.

45 states, DC, and four territories permit no-excuse early voting in some form and all states allow for some form of absentee or mail-in balloting.

The coronavirus pandemic historically disrupted the voting process for almost every state, resulting in a record 69% of voters casting their ballot by mail or before Election Day in 2020.

While a number of states subsequently adopted new and mail-in voting measures permanently, close to a dozen, primarily red states, have enacted laws that restrict access to the vote. Since 2020, states have passed more than 30 new voting restrictions, from voter ID requirements to limits on mail-in voting and polling locations. 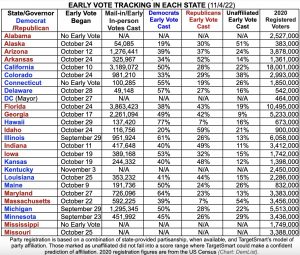 Although predictions vary widely, all the evidence points to record turnout for a midterm, matching or exceeding 2018, with both parties headed to the polls in big numbers.

Democrats are voting early at a higher rate, particularly African-Americans and women, as compared to even 2018. The youth vote is also expected to exceed 2018 numbers, and the largest age group of early voters in every state so far is senior citizens.

Voters in the battleground states of Arizona, Michigan, and Pennsylvania have already cast more than 1 million ballots each. Nearly two million have voted early in Georgia, a 29% jump compared to this point in 2018. Georgia Secretary of State Brad Raffensperger (R) expects that 2.4 million voters will have cast their ballots by tonight. 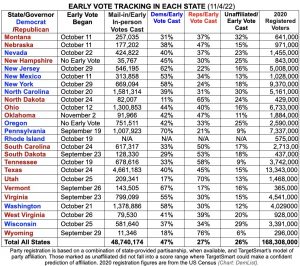 In Arizona, Nevada, and Pennsylvania, a slightly higher share of Democrats have voted early compared to both 2018 and 2020. Independent voters are also turning out early in Arizona and Nevada, where more than a quarter of all pre-election voters under 40 are independents.

The number of Wisconsinites registered to vote is higher than any previous midterm election, as is the number of people voting by mail or voting early.

Have You Voted? Voting Resources In Your State