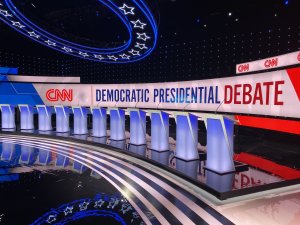 Tonight's Democratic Presidential Primary Debate, the seventh of twelve sanctioned by the DNC, will kick off at 9:00pm ET from Drake University in Des Moines, Iowa.

Last Friday, billionaire Tom Steyer became the sixth Democratic contender to meet the thresholds imposed by the Democratic National Committee (DNC) to qualify for the stage.

This month's debate will be held in Des Moines, Iowa, 20 days before the first-in-the-nation Iowa Caucus on February 3rd.

There will be five more debates before the end of the primary season in June. For the full 2020 debate schedule, go to DemDaily: The Download on the 2020 Debates.

DemList will, once again, host the Democratic Convention Calendar -- free for all to post and promote their events. Help us launch the calendar by the end of January. Please contribute today.

September 14, 2018 This week wrapped up the last of the state primaries, launching the official stretch to the November 6th general election — now just 52 days away. New Hampshire Seats...