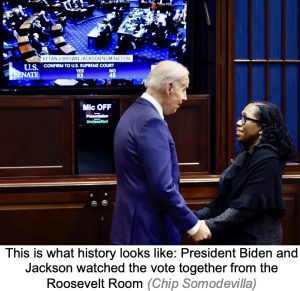 At 2:17pm today, Judge Ketanji Brown Jackson was confirmed to the US Supreme Court.

In a vote of 53 to 47, Senators confirmed President Joe Biden's historic nominee as the first Black woman to the High Court.

The close vote was not a reflection of the brilliant jurist, deemed "imminently qualified" by the American Bar Association, but symbolic of the divisions in Congress that harshly demand adherence to party lines.

In announcing her support Monday, Murkowski praised Jackson's "grace under pressure" during the intense scrutiny of the Judiciary Committee hearings, and "the important perspective she would bring to the court” as a former Supreme Court law clerk, federal public defender, trial judge and appeals court judge. 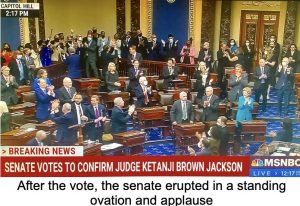 Her decision, Murkowski added, “also rests on my rejection of the corrosive politicization of the review process for Supreme Court nominees, which, on both sides of the aisle, is growing worse and more detached from reality by the year.”

The vote, which began at 1:54pm, was delayed midway for some 20 minutes by the absence of Senator Rand Paul (R-KY), who was away from the Hill. Once he had arrived, Paul cast his “no” vote from the Senate cloakroom because he was dressed too casually to meet the jacket-and-tie dress code for the chamber.

It did not deter from the historic victory, made more poignant by the fact that it was the first female and first black Vice President, Kamala Harris, who presided over the vote in her role as President of The Senate. 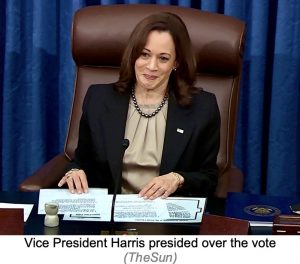 Of the confirmation, Harris said she was "overjoyed and deeply moved," adding, "there is so much that is happening in the world now that is presenting some of the worst of this moment and human behaviors, and then we have a moment like this that reminds us that there is still so much yet to accomplish and that we can accomplish, including a day like today...that we have just made the decision to put this extraordinary jurist on the highest court of our land. It is a good statement about who we are."

Senate Majority Leader Chuck Schumer (D-NY) said, “Today we are taking a giant, bold and important step on the well-trodden path to fulfilling our country's founding promise. This is a great moment for Judge Jackson but it is an even greater moment for America as we rise to a more perfect union." 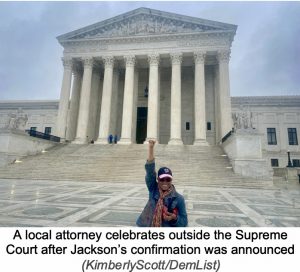 Jackson will not formally ascend to the Supreme Court until the end of this term in June, when Justice Stephen Breyer, whom Jackson is replacing, retires.

She may begin executing her duties after taking two oaths: The Constitutional oath, in which she affirms she is bound to support the Constitution and that "no religious test shall ever be required as a qualification to any office," and the judicial oath, in which she vows to administer justice impartially and faithfully, "without respect to persons, and do equal right to the poor and to the rich."

Jackson could then take the bench with the start of the new judicial term, traditionally the first Monday in October.