In the West Virginia US Senate race, Don Blakenship, who failed to win the May 8th Republican primary, is challenging the state's "sore loser" law in an attempt to run in the November 6th general election as a member of the Constitution Party.

Like many states, West Virginia has an election law that prevents candidates who lost a primary election from running, under a later filing date, on a third-party ticket.

This begs the question, what are the "third" or other US political parties?

Each party is defined by its ideology and positions on issues and, although disparity exists within the range of those opinions, most elected lawmakers fall roughly in line with their party's stance on laws and policies.

History
Although the founding fathers of our country were wary of the power of political factions, parties nevertheless grew out of natural debate, starting with divisions over the US Constitution. 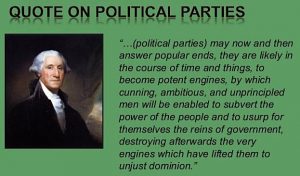 The first US political party, The Federalists, was founded by Alexander Hamilton and allies in 1787, who advocated for a strong central, or federal, government that believed that capital and industry were the basis of a healthy republic and were supported by northern businessmen, bankers and merchants.

By contrast, the Democratic-Republican Party, founded by Thomas Jefferson in 1796, and supported by planters, farmers and artisans, believed the federal government's power should be limited -- and left in the hands of state and local governments.

By the 1820's, sharp regional differences within the country, which eventually led to the Civil War, further divided inter-party ideology.

When Andrew Jackson, a Democratic-Republican from Tennessee, was elected president in 1828, he changed the party's name to Democrats. In response, the Federalists joined anti-Jackson Democrats to form the National Republican, or Whig, Party.

By 1860 there were four major parties - Northern Democrat, Southern Democrat, Republican, and the Constitutional-Union Party (ex-Whigs). With the election of Abraham Lincoln as President the Republican party was solidified, with the Democrats as their major opposition.

Third Parties
Although the United States operates under a two-party system, there is nothing in the Constitution that mandates formation of any political party.

These "third parties" are often focused around more narrow issues or ideology, and have often played a role in the outcome of elections by drawing from, or agreeing to support, a major party candidate.

Dozens of minor parties exist on the local, state and national level, from the Peace and Freedom, Socialist and Liberation, Reform, Veterans and Working Families Party, to the Better for American Group.

The largest of the US third parties is the Libertarian Party, founded in 1971, with now over 200 local elected officials, including four state legislators.

The other major players are the Green Party, active since the 1980s, and the Constitution Party, which grew out of the U.S. Taxpayers Party, founded in 1992.

The Libertarian and Green Parties put forth candidates in the 2016 Presidential election that garnered 1.1% to 3.3% of the vote, and thirty-one other independent or third-party candidates were on the ballot in at least one state.

Independents
Independent candidates are those who secure a place on the ballot through signatures, and run with no party affiliation.  Only two Members of Congress are independents, Senator Bernie Sanders (VT) and Angus King (MN), both who caucus with the Democrats.

With divisions amongst, and within, the national Republican and Democratic parties, Americans are increasingly identifying themselves as "independent" voters.

That independence is what fuels our political system.  Those independent voters are key to "swinging" an election victory to, ultimately, a Republican or Democrat.