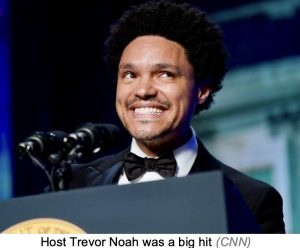 The White House Correspondents' Dinner was held Saturday night, the annual roast of the best and the brightest of journalism, and the people they cover -- with a little bit of Hollywood and political elite thrown in.

The red carpet event, which has been on hiatus for two years due to the pandemic, was a welcome return for some 2,600 journalists, media members, government officials, and celebrities all too anxious to work the room.

The evening is also traditionally when the President gets to take a comedic shot at the press corps and other political figures, and Biden rose to the occasion. 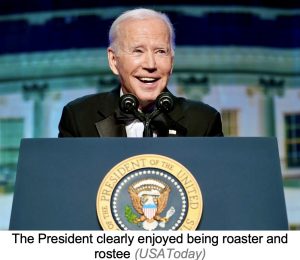 The Best of Biden
Opening his remarks, the self-deprecating Biden acknowledged his popularity status: “I’m really excited to be here tonight with the only group of Americans with a lower approval rating than I have.”

In an early dig at President Donald Trump, who skipped the dinner during his time in office, Biden said, “This is the first time a president has attended in six years -- it’s understandable -- we had a horrible plague followed by two years of COVID.”

He also acknowledged the COVID concerns around the event, while projecting confidence. “We’re here to show the country that we’re getting through this pandemic,” said Biden. Plus, "everyone had to prove they’re fully vaccinated and boosted. So if you’re at home watching this and you’re wondering how to do that, just contact your favorite Fox News reporter. They’re all here -- vaccinated and boosted, all of them.” 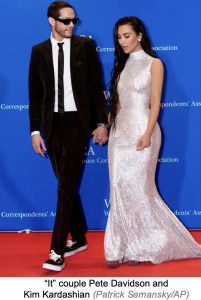 "Fox News, I am really sorry your preferred candidate didn't win the presidential election. To make it up to you, I am willing to give you my chief of staff so he can tell Sean Hannity what to say."

“Folks, I’m not really here to roast the GOP. That’s not my style. Besides, there’s nothing I can say about the GOP that Kevin McCarthy hasn’t already put on tape.”

“Republicans seem to support one fella: Some guy named Brandon. He’s having a really good year, and I’m kind of happy for him!”

Of the video skit featuring comedian James Corden, who just announced he is leaving “The Late Late Show,” Biden said, "The good news is, if all goes well, I have a real shot of replacing James Corden." Comparing the two, he added they both were "great performers, going out on top after eight years on the job – sounds just about right to me." 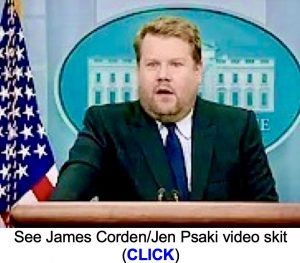 And as he turned the mic over to Noah, Biden said: “The really good news is, now you get to roast the president of the United States, and unlike in Moscow, you won’t go to jail.”

From Trevor Noah
“It is my great honor to be speaking tonight at the nation’s most distinguished super-spreader event. For real, what are we doing here? Did none of you learn anything from the Gridiron dinner? I expect this from Sean Hannity, but the rest of you, what are you doing here?… The second someone offers you a free dinner you all turn into Joe Rogan…Anthony Fauci thought it was too dangerous to come tonight. Pete Davidson thinks it’s OK. And we all went with Pete.”

“I’m not doing this just for the attention. Alright? I’m a comedian, not Kyrsten Sinema. By the way, give it up for Kyrsten Sinema. Whoever thought we’d see the day in American politics when a senator could be openly bisexual, but closeted Republican? That’s progress.” 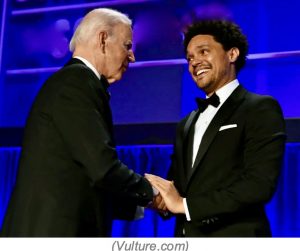 “We all saw what happened at the Oscars. I’ve actually been a bit worried about tonight. I won’t lie. What if I make a really mean joke about Kellyanne Conway, and then her husband rushes up on the stage and thanks me?”

“I’ve just got to say, this is so exciting. To be at this swanky party full of Washington’s most powerful people. It’s not as exciting as Madison Cawthorn made it sound, but it’s still very sexy.”

Noah chided an imaginary Ron DeSantis in the audience for already trying to outmaneuver Trump for 2024, and "playing it coy. He won't even tell people if he got the booster. Or, as they say in Florida, 'Don't ask, don't tell.'"

“The great chef José Andrés is here tonight… Whenever there’s a disaster anywhere in the world, chef José is there, which I guess is why he’s sitting at the CNN table tonight.” 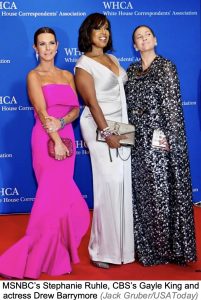 “The real reason that it’s such an honor to be here tonight is that we all get to be in the same room as the most powerful man in the United States. So let’s give it up for Joe Manchin, everybody.”

"Thank you for having me here," Noah said to Biden. "I was a little confused on why me, but then I was told that you get your highest approval ratings when a biracial African guy is standing next to you."

“Even as first lady, Dr. Jill Biden continued her teaching career. The first time a presidential spouse has done so, ever. Congratulations. Now, you might think it’s because she loves teaching so much, but it’s actually because she’s still paying off her student debt. I’m sorry about that, Jill. I guess you should’ve voted for Bernie (Sanders)."

Turning to Biden, Noah said, "these people have been really hard on you, which I don't get. Ever since you have come into office things are really looking up. Gas is up. Rent is up. Food is up. Everything.

“Fox News is sort of like a Waffle House. Yeah, it’s relatively normal in the afternoon, but as soon as the sun goes down, there’s a drunk lady named Jeanine threatening to fight every Mexican who comes in.” 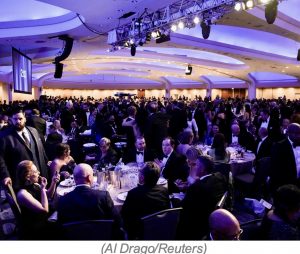 As he departed, Noah delivered one last barb: “Please be careful leaving tonight, we all know this administration doesn’t handle evacuations well.”

DemDaily: On the Brighter Side

February 12, 2017 It has been a long three weeks for the country and we all have a great deal of work ahead of us.  As we go into the next week, some much needed humor! Upcoming Join us for...