DemDaily: The Weirdest Laws on the Books

DemDaily: The Weirdest Laws on the Books 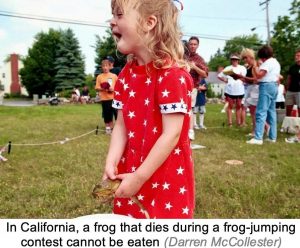 Throughout US history, states have passed a variety of obscure, quirky and often bizarre laws that reflect the pressing issues of a certain time but have never made it off the books.

Most may not be currently enforced, but they mean everyday citizens are probably breaking the laws in their state without knowing it. For your amusement, here are a few of the more notable examples still in effect.

Alabama: Pretending to be a member of the clergy is punishable by a fine of up to $500 and/or up to a year in jail. This law extends to Halloween.

In Mobile, Alabama, it is illegal to keep, store, use or sell silly string or plastic confetti.

Arizona: A permit is needed to feed garbage to a pig unless it is one's own household garbage. Minnesota also protects pigs, making any contest in which participants try to capture a greased or oiled pig illegal. 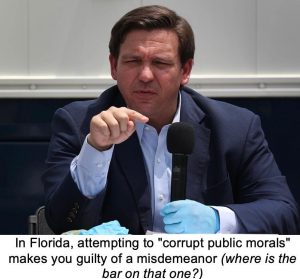 California: It is illegal to eat frogs that die in frog-jumping contests.

Colorado: It is illegal to throw a snowball in public in Aspen.

Delaware: Pawn shops are prohibited from receiving or selling artificial limbs or wheelchairs. They also are not allowed to take manhole covers.

Florida: Since 1974 alcohol sales have been banned during hurricanes.

It is a crime for men to wear strapless dresses and it is illegal to sing in a swimsuit.

It is illegal to live with a partner if not married. 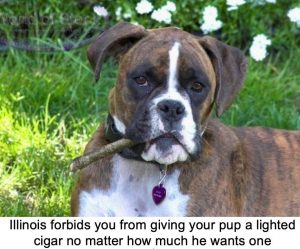 It is illegal to gossip. Florida Statutes outlines exactly what can and cannot be said when talking about another person.

In Tampa Bay, it's illegal to eat cottage cheese after 6pm on Sundays.

Hawaii: Billboards have been outlawed in Hawaii since 1927, even before it became a state. Vermont followed suit in 1968, Maine did so in 1978, and Alaska joined the club in 1998.

Idaho: Cannibalism is strictly prohibited and punishable by up to 14 years in prison, unless under "life-threatening" survival conditions.

Illinois: In the city of Galesburg, “acrobatic or fancy” bike riding is banned.

Kansas: It's illegal to sell liquor by the glass in over 25 counties across Kansas, which repealed prohibition a full 15 years after Congress. 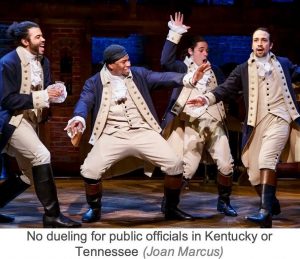 Kentucky: Use of a reptile in religious services is prohibited.

No person shall sell, exchange, or possess living baby chicks, fowl or rabbits under the age of two months which have been dyed or colored in quantities of less than six

Women can not marry the same man four times.

In Kentucky, every legislator, public officer, and lawyer must take an oath stating that they have not fought a duel with deadly weapons. Similarly, in Tennessee, people cannot hold public office if they have been in a duel.

Maine: Dancing at a bar that sells alcohol is prohibited, unless the bar has a "special amusement permit." 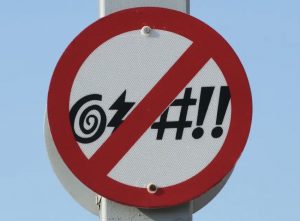 Maryland: Fortune telling is illegal and a misdemeanor, subject to up to $500 and jail.

In Rockville, it is illegal to publicly "profanely curse and swear or use obscene language” punishable by fine of up to $100? Similarly, in both Oklahoma and West Virginia, public swearing is subject to a $1 fine. While in Mississippi it is no longer officially illegal to use vulgar language, people still can't display obscene stickers, decals, or emblems on cars or clothing.

Massachusetts: Since 1848, it has been illegal to scare a pigeon, with offenders facing a $20 fine and up to a month in prison.

The national anthem, if sung or played in public, must be performed in its entirety. Partial, amended, or embellished versions are punishable by a fine of up to $100. 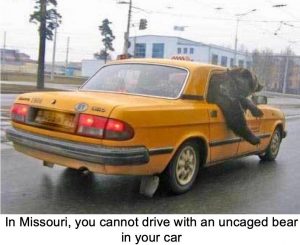 Michigan: It is illegal for a person in an "offensive state of intoxication" to ride a train or interurban car as a passenger.

Mississippi: It is a misdemeanor to have more than one illegitimate child, punishable by fines, jail time or both. Still on books?

Missouri: In Jefferson, Missouri, it is illegal to hold more than two garage sales in the same location in one year, and must be within designated hours.

Nevada: In Reno, Nevada, it's illegal to sit down or lie down on a public sidewalk.

New Hampshire: It is illegal to carry away or collect seaweed at night.

New Jersey: It is a third-degree crime to wear a bulletproof vest while committing murder, robbery or assault. 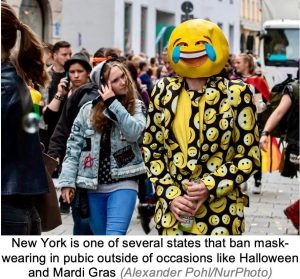 New York
Unless at a gathering that has received proper approval, it is illegal in New York to be "masked or in any manner disguised by unusual or unnatural attire or facial alteration."

North Carolina: Playing Bingo is limited to five hours and can only be played for fundraising purposes unless the prize is less than $10 (called “Beach Bingo”). Maine also regulates Bingo or "Beano."

Ohio: The Ohio Revised Code states, "No person shall be arrested during a sitting of the Senate or the House of Representatives, within the hall where such a session is being held, or in any court of justice, during the sitting of such court, or on Sunday, or on the Fourth of July."

Oklahoma: Per a 1910 Oklahoma law, eavesdropping is a misdemeanor.

A state statute still on the books states it is a "fact that there exists an international Communist conspiracy" committed to overthrowing the US government.

Oregon: In Yamhill, the practice of “occult arts” is illegal, including astrology, phrenology, palmistry, clairvoyance, mesmerism, spiritualism, or "practice recognized to be unsound and unscientific whereby an attempt or pretense is made." 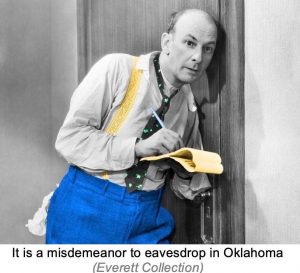 Rhode Island: It is a criminal offense to impersonate an auctioneer.

South Carolina: Dance halls are not allowed to be within a quarter-mile of a rural church or cemetery.

Texas: You can get married by proxy, sending someone to get married in your place if you have a legitimate reason for absence, like military service.

Utah: Happy hours are not allowed. As it is illegal to sell alcohol at a discounted price many establishments offer “appy hour,” when appetizers are on sale instead. Other drinking restrictions include only one shot of alcohol per drink (so no doubles) unless in a less-potent spirit or cocktail, a maximum of 4% alcohol by weight or 5% alcohol by volume on draft beer, and a statewide last call of 1:00am.

Vermont: As of 2009, it is illegal for anyone to ban the use of clotheslines "or other energy devices based on renewable resources" in the Green Mountain State. 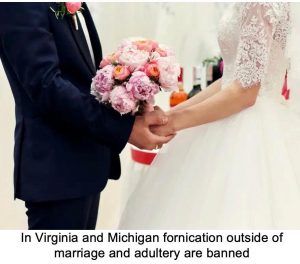 Virginia
It is illegal to "hunt or kill any wild bird or wild animal, including any nuisance species" on Sundays, except for raccoons.

Washington: Bigfoot hunters, beware. Skamania County passed a law in 1969 deeming the "slaying of Bigfoot to be a felony and punishable by five years in prison." The law was later amended, designating Bigfoot as an endangered species.

You can't use x-rays for shoe fittings in Washington.

Wisconsin: Wisconsin is one of only two states in the nation that bans the selling of home-baked goods (the other is New Jersey), punishable to hefty fines and up to six months in jail.

In Wisconsin, both butter and cheese, hallmarks of this midwestern state, must be "highly pleasing" and free from any "undesirable flavors and odors."

Wyoming: you cannot "wound" a fish with a gun.