This week marks the 53rd anniversary of the 1965 Voting Rights Act (VRA), considered the most far-reaching civil rights legislation in U.S. history.

More than a half a century later, however, those same rights are under assault. 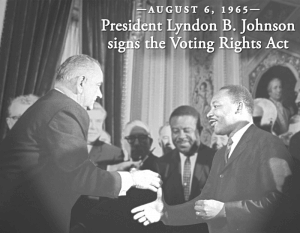 Lyndon Johnson, who assumed the presidency following the November 1963 assassination of President John F. Kennedy, had been re-elected by a landslide in 1964 and made protection of voting rights a mandate of his administration.

Johnson crafted legislation that illegalized election practices that denied the right to vote based on race, and required jurisdictions with a history of voting discrimination to get federal approval for changes in their election laws before they can take effect.

Five months later, with Dr. Martin Luther King Jr. and other civil rights leaders present, LBJ signed the Voting Rights Act into law, calling it, "A triumph for freedom as huge as any victory that has ever been won on any battlefield."

Epilogue
Nevertheless, in the ensuing decades, various discriminatory practices were still used to prevent African Americans and minorities, particularly those in the South, from exercising their right to vote.

Congress passed major amendments extending the VRA's protections in 1970, 1975, 1982, 1992, and 2006, but in 2013, the Supreme Court, in Shelby v. Holder, struck down the federal pre-clearance provison required of nine Southern states whose laws had been previously deemed perniciously politically discriminatory to minorities. 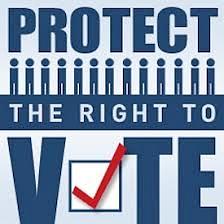 VRA, Section 2, prohibits every state and local government from imposing any voting law that results in discrimination against racial or language minorities.

Since the ruling, numerous states, including Alabama, Arizona, Arkansas, Kansas, North Carolina, North Dakota, Ohio, Wisconsin and Texas have passed laws reversing earlier VRA protections and, in some cases, enacted more aggressive voter suppression laws.  While the courts have struck down some, voter restrictions stll remain in place in over a dozen states.

Subsequent legislation to reinstate critical VRA protections, including the 2014 and 2015 "Voting Right Amendment Act" have been introduced in Congress, but did not progress beyond the committee level.

At this point Section Two of the Voting Rights Act remains the only protection against racial discrimination in voting.

VRA Under Trump
Since January of 2017, President Trump's Department of Justice (DOJ) has not filed a single case of voter discrimination and, in fact, has reversed prior positions on protections.

In May of last year Trump formed The Presidential Advisory Commission on Election Integrity to, in effect, follow through on his previous false claims that millions of illegal immigrants had voted in the 2016 United States presidential election, costing him the popular vote.

In conjunction with the DOJ, and under the leadership of Vice President Mike Pence and Kansas Secretary of State Kris Kobach, the Commission attempted to secure personal voter information from every state -- but the bipartisan backlash, legal challenges and accusations of voter supression shut the Commission down after six months. 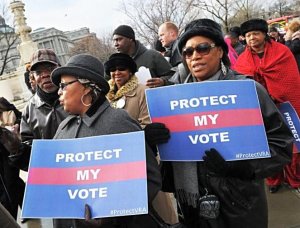 According to the LCCR, black voters, on the average, wait twice as long as white voters to vote (pic: Mandel Ngan/Getty)

Voter disenfranchisement, currently at issue in the states and the courts, includes everything from purging minorities from voter rolls and imposing early voting hours that limit the ability of hourly-wage workers to vote, to consolidating polling places to make it inconvenient for minority voters to access the polls.

It also commonly comes in the form of mandatory voter ID laws, openly advocated by President Trump, and gerrymandering, or discriminatory redrawing of legislative districts.

Most recently, the Supreme Court of the United States (SCOTUS), in Abbott v. Perez reversed a lower court's findings of violations of the Voting Rights Act and racial gerrymandering -- rejecting the argument that the Texas legislature had intentionally discriminated against Latino and African-American voters in adopting the 2013 congressional and state house maps.

The June 25th, 5-4 decision, was passed along ideological lines between the conservatives and the liberals on the court.  With the appointment of Trump's new supreme court nominee, the court will lean even further to the right.

Our country, and the voting rights of all its people, are in the greatest danger since 1965. The right to vote is the single greatest privilege granted to Americans and we cannot stop until every citizen enjoys that right. Your vote ensures all vote.

Sources: History.com, Brennan Center for Justice, CNN, Leadership Conference on Civil Rights
DemList will not be publishing on Fridays during the August Congressional recess