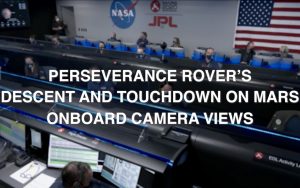 Perseverance, National Aeronautics and Space Administration's (NASA) rover, safely landed on the surface of Mars last Thursday, completing the first phase of the Mars 2020 mission to seek signs of ancient life on the red planet.

The rover, which launched July 20, 2020, took almost seven months to make the 300-million-mile journey between Earth and Mars. Following the infamous "seven minutes of terror" it takes to descend through the Mars atmosphere, Perseverance touched down in Jezero Crater at 3:55 pm EST, on February 18, 2021.

Shortly after the landing, NASA released footage of a never-before-seen view: what it looks like to land on Mars!  A camera on the descent module of the spacecraft captured the perspective, something that wasn't possible on previous missions. 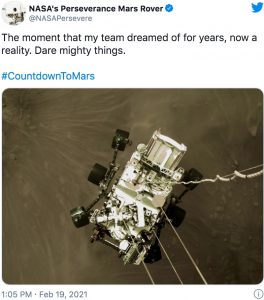 Perseverance has sent 465 tweets to its 2.3 million followers (CLICK)

On February 19th, the Perseverance crew tweeted the shot that captured "The moment that my team dreamed of for years, now a reality. Dare mighty things."

The rover, which is equipped with 25 cameras and two microphones, also captured the first audio ever recorded on another planet.

Mission To Mars
In July 1965, the Mariner 4 spacecraft flew past Mars and took the first close-up image of another planet. Since then, there have been around 40 global attempts to reach Mars or its larger moon, Phobos. Of those, the United States has sent 19.

Five never made it, four crashed into Mars and two failed after landing. Only eight US missions, including the Perseverance, have successfully landed crafts on Mars.

Perseverance's mission is expected to last for a full year of Mars time - 687 Earth days, or nearly two Earth years. Initially, it will record its surroundings as NASA engineers monitor the rover's performance. Once the rover is cleared for full operation, it will deploy the Ingenuity helicopter, a four-pound device that NASA hopes will achieve the first controlled flight in an extraterrestrial atmosphere. 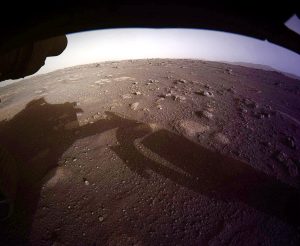 The First Audio from Mars (NASA/CLICK)

Perseverance will then proceed to its main mission: collecting rock and soil samples which can later be returned to Earth for analysis. NASA plans to land a craft on Mars in 2028 to retrieve the samples which, if successful, would be the first mission to involve a rocket launch from another planet.

The First Lunar Landing
It has been over 51 years since the first Moon landing, when Neil Armstrong spoke those famous words as he stepped down off the ladder of the Eagle lunar lander, "That's one small step for man, one giant leap for mankind."

Armstrong, along with fellow astronaut Buzz Aldrin, would become the first of 12 Americans to set foot on the lunar planet, while over half a billion people watched in fascination, forever changing the way we view our solar system.

The goal of reaching the Moon was spurred on by the Soviet Union's 1957 launch of the first satellite, Sputnik, into space, and President John F. Kennedy's goal of landing a man on the Moon and returning him safely before the end of the decade. The event marked a victory for the United States in the technological race to space.

The United States and Russia later joined forces, along with Japan, Europe and Canada, to study space through the International Space Station (ISS), launched in 1998 through intergovernmental treaties and agreements. On the ISS, crews conduct experiments in biology, human biology, physics, astronomy, meteorology and other fields.

NASA Today
The last man to walk on the Moon, geologist and future US Senator Harrison Schmitt, was in 1972. The science of exploring space, however, has continued through the ISS and other missions, with uncrewed probes that have visited every planet in the solar system.

Today, NASA is once again preparing for human missions to the Moon, by 2024, through its Project Artemis, a $30 billion endeavor to ultimately create a sustainable presence on the lunar planet. In December of 2020, NASA announced its slate of 18 astronauts for the Artemis Team, which will include the first woman to land on the moon. 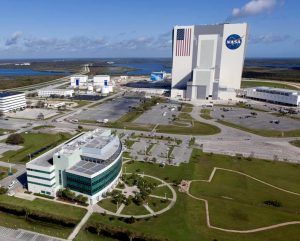 Your Ticket to Space
In the interim, private spaceflight companies have begun, in partnership with NASA, to develop and fund their own efforts to launch a commercial marketplace in low-Earth orbit.

SpaceX, launched by engineer and entrepreneur Elon Musk, Blue Origin, led by Amazon founder Jeff Bezos, and Virgin Galactic, founded by Richard Branson, are among the chief companies competing for the future of space tourism.

SpaceX drew worldwide fame In December of 2010 when, with its Falcon 9 rocket, it become the first private company to return a spacecraft to low-Earth orbit and, in May of 2012, became the first to deliver cargo to and from the International Space Station.

In February of 2018, Space-X sent the Falcon Heavy rocket into space. On board was Musk's own Tesla Roadster with a dummy called "Starman," rocking to David Bowie's "Space Oddity," which was launched into an Earth-Mars elliptical orbit around the sun -- for more than a billion years.

In May of 2020, SpaceX hit another milestone, becoming the first private company to send humans into orbit, as well as to send a team to the International Space Station. 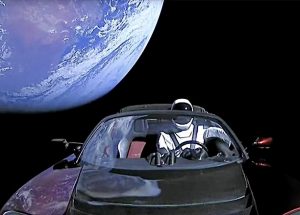 Elon Musk's Starman and Tesla were launched into space in 2018

Virgin Galactic claims to already have $80 million in deposits from more than 600 aspiring space travelers in 60 countries. The price tag for a seat on the suborbital flight is $250,000.

These innovations, and last week's Mars landing, are a welcome reminder of the possible, when we dare, of things larger than our petty earthly battles, and of what it is like to be inspired again!