While the private vetting of contenders for Joe Biden's Vice Presidential running mate is ongoing, the public is weighing in on its choices, which have shifted in popularity in recent weeks.

In a March 15th debate between Biden and then-rival Bernie Sanders, Biden committed to picking a woman as his #2, narrowing his choices to a field of less than a dozen, and a likely short list of 3-4.

The pressure to pick a woman of color, however, has increased considerably following the racial tensions and civil unrest of the last three weeks following the death of George Lloyd and other African Americans at the hands of the police.

The shift was not driven by black voters, however, as roughly 2 in 5 already prioritized putting a person of color on the ticket. Rather, white and liberal voters have become more likely to say it's important for Biden to pick someone who isn't white - with that number rising 7 points to 26% since the April 10-12 poll. 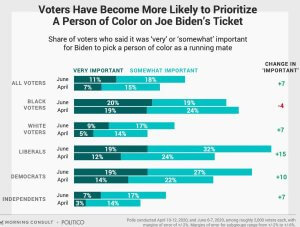 The push for Biden to select an African American woman, however, was well underway prior to the tragic events in Minneapolis.

Black voters were undisputedly responsible for Biden's comeback win in the February 29th South Carolina primary -- one that propelled him to an unobstructed path to the nomination.

Black women, in fact, have been the Democrats' most reliable voting bloc since passage of the Voting Rights Act in 1965.

According to Politico, sources close to the VP discussions say the Biden campaign "sees the outpouring of anger and emotion in the wake of George Floyd's death as a watershed moment that has made the issue of a black running mate a top consideration."

Biden has set August 1st, two weeks ahead of the Democratic Convention in Milwaukee, Wisconsin, as the target date for selecting his vice presidential running mate. 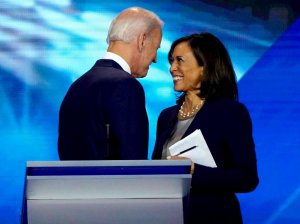 Harris remains at the top of Betting List (Mike Blake/Reuters)

In the interim, the current contenders on the vetting list!

New to the list is rising star and Atlanta Mayor Keisha Lance Bottoms, whom Biden has praised for her "incredible" handling of demonstrations in Atlanta. Less likely is former Obama National Security Advisor and US Ambassador to the United Nations Susan Rice.

Former Congresswoman and New Mexico Governor Michelle Lujan Grisham is the only Latina being vetted. Nevada Senator Catherine Cortez Masto, who had been rumored to be in contention, pulled her name from consideration, citing the state of Nevada's economy.

Iraq War veteran and Illinois Senator Tammy Duckworth, the first Thai-American woman and first woman with a disability to be elected to Congress, is among the contenders. 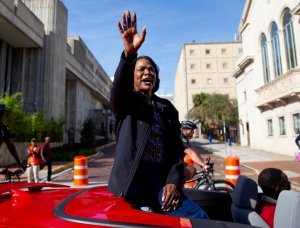 Also included are battleground state Governor Gretchen Whitmer (MI) who has drawn national attention for leading her state's response to the coronavirus, and former New Hampshire Governor and US Senator Maggie Hassan.

Minnesota Senator Amy Klobuchar, a moderate from the Midwest who garnered high marks for her presidential primary performance, was among the top three most-likely picks until recently.

In the wake of the George Floyd killing, however, Klobuchar has come under fire for failing to prosecute controversial police killings, including one involving Derek Chauvin, the officer now charged with second-degree murder in the Floyd case.

Despite the betting odds, which show Harris favored by more than 2-to-1, and Demings and Bottoms surging, Massachusetts Senator Elizabeth Warren, one of Biden's main primary opponents, remains a top contender among Democratic voters.