Andrew Yang, a tech entrepreneur with over 100 policy positions on his website, is running what he proudly calls "the nerdiest presidential campaign in history."

His heavily internet-based and somewhat unorthodox campaign launched far ahead of most of the field, with the filing of his candidacy with the Federal Elections Commission on November 6, 2017. 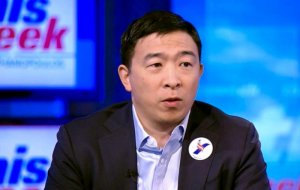 Initially viewed as a longshot candidate, Yang's increased visibility online and on air in recent months has paid off, qualifying him for the first Democratic debate June 26th & 27th in Miami, Florida.

Background
Born in upstate New York, Yang and his brother are the sons of Taiwanese immigrants who believed in "the American Dream," and went on to become a leading researcher at IBM, and a university administrator.

Yang, 44, is a graduate of Brown University, with B.A. in Economics, and received his law degree from Columbia University in 1999.

After a short stint in corporate law, he began his entrepreneurial career working with a series of tech startups, before running a top test-preparation company, Manhattan GMAT, that was eventually bought by The Washington Post Co./Kaplan in 2009.

He subsequently launched Venture for America, a nonprofit that matched aspiring entrepreneurs with fellowships at young companies.

His work through VFA in helping to create companies and jobs in over 20 US cities, earned recognition from the Obama White House, which named Yang a Champion of Change in 2012 and a Presidential Ambassador for Global Entrepreneurship in 2015.

Yang's campaign and platform is centered on three major concepts: Medicare for All, "Human-Center Capitalism," and a Universal Basic Income (UBI).

His "Freedom Dividend," a form of UBI, advocates for a $1,000 per month dividend to all US citizens over the age of 18, as compensation for future mass unemployment caused by technological automation.

Yang reportedly is planning to give out $1,000 per month to two families, in early primary states New Hampshire and Iowa, as a test case to demonstrate the plan's benefits. 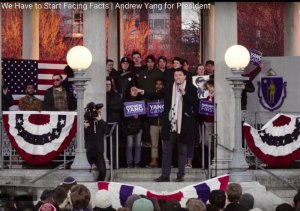 In February, the Democratic National Committee (DNC) announced new primary debate qualifications -- requiring a candidate to have either reached 1% in the polls, or to have received contributions from at least 65,000 unique donors and a minimum of 200 unique donors per state in at least 20 U.S. states.

Website: Yang2020
Yang Books: The War on Normal People: The Truth About America's Disappearing Jobs and Why Universal Basic Income Is Our Future (2018)
Smart People Should Build Things: How to Restore Our Culture of Achievement, Build a Path for Entrepreneurs, and Create New Jobs in America (2014)

More to come: The candidacy of Marianne Williamson. Miramar, Florida Mayor Wayne Messam has joined the race for the White House. Montana Governor Steve Bullock and New York Mayor Bill De Blasio are expected to announce in the coming weeks.