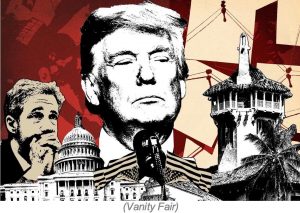 The evidence adds to the Department of Justice's criminal investigation of Trump for his removal of hundreds of top-secret government records from the White House in possible violation of the Espionage Act.

It is the latest development in one of multiple ongoing federal and state-level investigations regarding Trump's actions before, during and after his presidency. 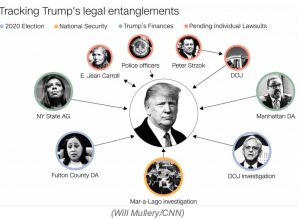 Although Trump and his children, who are senior executives in the company, were not charged personally, the Trump Organization could face a maximum of $1.61 million in fines when sentenced in mid-January. When asked by CNN why charges weren’t brought against the former president, Bragg said the investigation "is ongoing."

The evidence, in part, arose from a criminal referral from the New York Attorney General's mirror civil investigation, which is scheduled to go to trial October 2, 2023.

The order is part of a $250 million civil lawsuit, announced by James September 21st, against Trump, the Trump Organization, three of his adult children and others for their part in a decade-long scheme to criminally defraud tax authorities. 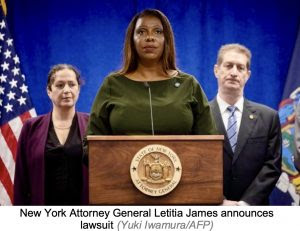 Among other penalties, James is seeking to permanently bar Trump, Donald Trump Jr., Eric Trump, and Ivanka Trump from serving as an officer of a company or doing business in New York state.

The 220-page lawsuit details ten years of "audacious" financial misconduct, investigated and documented by the DA's office over a three-year probe. The scope of the suit encompasses millions of documents and interviews with more than 65 witnesses, including several of Trump's inner circle who are now testifying against him. Among those, former Trump CFO Allen Weisselberg, who was convicted last week of 15 felonies for tax evasion.

Collectively, over a dozen people from the Trump Organization, his family, and business associates have been arrested, indicted or imprisoned.

In Georgia, where Trump's hand-picked candidate for US Senate was just defeated, the former president is under criminal investigation by the Fulton County District Attorney regarding his efforts to pressure the Georgia Secretary of State to overturn the state's 2020 election results.

At least eight Trump allies have been subpoenaed, including Trump advisor Rudy Giuliani and Senator Lindsey Graham (R). Investigators are expected to issue indictments relating to the case as soon as this month. 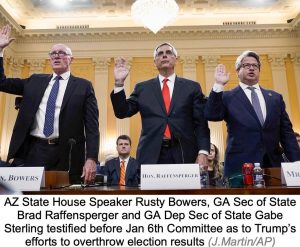 Then there are the multiple investigations and lawsuits related to the January 6th Capitol insurrection, including that of the Department of Justice, the largest in its history.

According to the DOJ, more than 950 individuals have been charged with criminal activity relati to the attack on the US Capitol. That includes former Trump advisor Steve Bannon, who was convicted in July of criminal contempt for defying the January 6 Committee's subpoena to testify.

On November 18, Attorney General Merrick Garland announced the appointment of an independent Special Counsel, former Chief Prosecutor for The Hague Jack Smith, to oversee both the 2020 election interference investigation into Trump and his allies and the classified documents retained probe.

Separately, the Supreme Court, on November 22, rejected a final bid by former President Donald Trump to prevent Congress from obtaining his income tax returns from the IRS. The records were originally requested by the House Ways and Means Committee in 2019 in a probe into how the IRS audits the tax returns of sitting presidents.

It comes as the House Select Committee to Investigate the January 6th Attack, created by a vote of Congress in May 2021, prepares for the release of its final report December 21. 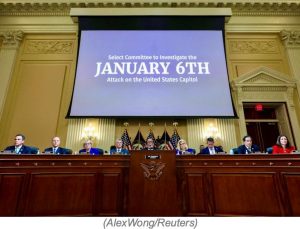 Over nine powerful public hearings, commencing June 9, 2022, the bipartisan committee presented the findings of their exhaustive year-long investigation into the violent January 6, 2021 insurrection at the US Capitol.

The hearings, methodically backed up by documented evidence, video and witness testimony from those closest to Trump, outlined the case against the former president as the leader of a "sophisticated seven-part plan to overturn the presidential election and prevent the transfer of presidential power."

Although the Committee is not empowered to draw conclusions on criminal matters, Committee Chairman Bennie Thompson (D-MS) revealed this week that it is prepared to issue criminal referrals to the DOJ.

While the Committee instituted a formal path for sharing relevant information with the DOJ in August 2022, Thompson said the complex interplay between hundreds of concurrent investigations limits the scope of what can be released.

... and these were the cases in play before Donald J. Trump announced, on November 15, that he is running for President in 2024. 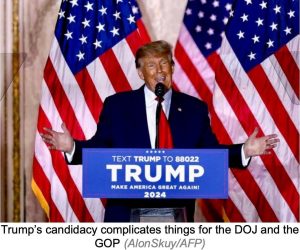