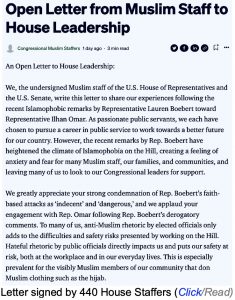 On Wednesday, in an open letter to the US House of Representatives leadership, 440 Capitol Hill staffers called on Congress to denounce Congresswoman Lauren Boebert’s (R-CO) for her anti-Muslim attacks against Congresswoman Ilhan Omar, and to “categorically reject this incendiary rhetoric that endangers the physical, mental and emotional well-being of staff across both sides of the aisle”.

The letter, signed by 62 Muslim staffers and 378 allied staffers, said, “As passionate public servants, we each have chosen to pursue a career in public service to work towards a better future for our country. However, the recent remarks by Rep. Boebert have heightened the climate of Islamophobia on the Hill, creating a feeling of anxiety and fear for many Muslim staff, our families, and communities, and leaving many of us to look to our congressional leaders for support.” 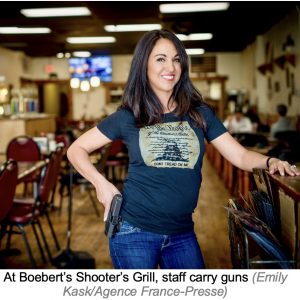 Boebert, who owns Shooters Grill, a restaurant in Rifle, Colorado, made a name for herself in the primary by defying Democratic Governor Jared Polis's orders to close businesses to fight the coronavirus pandemic.

Just days after being sworn into Congress, on January 5th, the day before the storming of the United States Capitol, Boebert tweeted, "Remember these next 48 hours. These are some of the most important days in American history."

Boebert, who had previously posted support for QAnon, Three Percenters and Proud Boys, all extremist groups involved in the insurrection, tweeted "Today is 1776" hours before the attack. While the Capitol was being stormed, Boebert posted information on Twitter about the police and pinpointed the location of other members, including Speaker Nancy Pelosi.

In June 2021, Boebert was one of 21 House Republicans to vote against a resolution to give the Congressional Gold Medal to police officers who defended the US Capitol.

Boebert is a member of the House Freedom Caucus, formed in 2015 out of the Tea Party movement, which aims to push the GOP leadership to the right. The ultraconservative group of approximately 40 House Republicans are ardent Trump supporters. In 2020 their PAC, the House Freedom Fund, spent $12.4 million in support of conservative candidates. 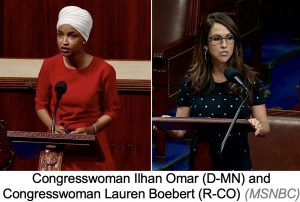 In May, in one of numerous social media attacks on Democratic Congresswoman Omar, Boebert called her "a full-time propagandist for Hamas", and in June, an "honorary member of Hamas."

At a September Republican fundraiser, as later shown in a Facebook video, Boebert suggested Omar was a terrorist, calling Omar and Congresswoman Rashida Tlaib (D-MN), another Muslim member of Congress, "black-hearted evil women."

In a concocted story, Boebert told attendees that she and an aide were joined by Omar on a Capitol elevator and that Boebert then said to her aide, "it's the Jihad Squad ... She doesn't have a backpack, she wasn't dropping it and running so we're good".

During a November 18, 2021, speech on the House floor, Boebert referred to Omar as "the Jihad Squad member from Minnesota," randomly saying she "has paid her husband, and not her brother-husband, the other one, over a million dollars in campaign funds.” 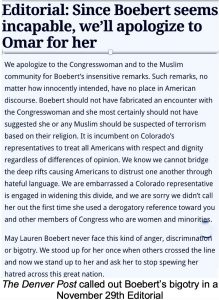 After more video of Boebert retelling the elevator story surfaced, the backlash forced the Colorado Congresswoman to issue an apology "to anyone in the Muslim community I offended with my comment about Representative Omar."

What was supposed to be an apology call between Boebert and Omar, however, went badly, with Boebert saying after that she would put "America first, never sympathizing with terrorists. Unfortunately, Ilhan can't say the same thing."

The assault on Omar and her Muslim colleagues, as well as other progressive Democratic lawmakers, is just the latest amid the toxic environment of division and now fear within the Halls of Congress itself.

On February 4th the US House of Representatives, including 11 Republicans, voted to strip Marjorie Taylor Greene (R-GA) of her committee assignments in response to her previous incendiary statements and endorsements of political violence. Those include Greene's repeated referral, along with Boebert's, to Omar and Tlaib as part of the "Jihad Squad."

Undeterred by her censure, Greene recently called Republicans who voted for Biden’s infrastructure bill “traitors” and posted their phone numbers on Twitter, leading to a death threat against Congressman Fred Upton (R-MI).

"Normalizing this bigotry not only endangers my life but the lives of all Muslims. Anti-Muslim bigotry has no place in Congress." -- Congresswoman Ilan Omar (D-MN) 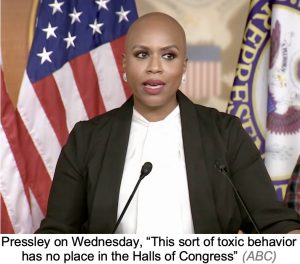 In a news conference last week, Omar said Boebert's attacks on her faith have triggered hundreds of death threats, playing one recording that ended with “You will not live much longer b****."

While Republican congressional leaders have been uncomfortably silent on Boebert, Democratic leaders and House Speaker Nancy Pelosi have pledged to take action.

On December 4th, On Thursday, five Democratic House caucus chairs called for Boebert to be stripped of her committee assignments, and yesterday, roughly three dozen House progressives, led by Congresswoman Ayanna Pressley (D-MA), introduced the resolution. The resolution is not privileged, which means Democratic leadership does not have to put the measure on the floor for a vote.

In a statement, Pressley said, “The House must unequivocally condemn this incendiary rhetoric and immediately pass this resolution. How we respond in moments like these will have lasting impacts, and history will remember us for it.”