While last night's primaries in Kansas, Michigan, Missouri, Washington State added to the triumphant ranks of women advancing to the midterm elections in November, the big news coming out of Tuesday's elections was the Special Election in Ohio's 12th Congressional District.

OHIO SPECIAL ELECTION
The contest to fill the remaining term of incumbent Republican Pat Tiberi, who resigned in January, is still a cliffhanger, where less than 1,800 votes still separate the winner. 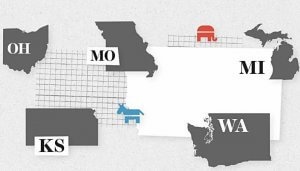 As of this morning, State Senator Troy Balderson (R) was leading Franklin County Recorder Danny O'Connor (D) 50.25 to 49.3%, a difference of 1,754 votes. With thousands of provisional ballots yet to be counted, the final result is not expected for at least a week and is likely to be followed by a recount.

The larger picture, however, is the fact that a Democrat is within a percentage point of winning a district that has been represented by a Republican since 1983, and one that Trump won by 11% in 2016.

This underscores voter patterns of significantly closing the gap for Democrats in red-state special elections, and improves the Democrats' narrative for taking control of the US House.

It also sets the stage for a re-match between Balderson and O'Connor in November, when the two will face each other again in the regularly scheduled November 6th general election, to determine who will represent the 12th in the 116th Congress. 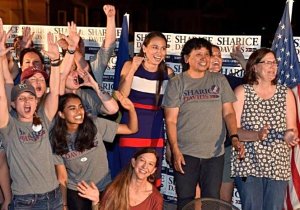 Coyler is battling for his party's nomination, however, trailing Trump-endorsed Secretary of State Kris Kobach by 191 votes after last night's primary. Under state law, less than .05% triggers an automatic recount.

The winner will go up against State Senator Laura Kelly, who won the 5-way Democratic primary contest with 51%.

Congressional: Dems have hopes for flipping two of the four Congressional Districts, all currently Republican-held. 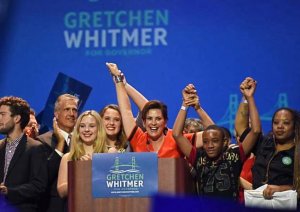 Highlights
Coming out of the primary, the forecast for keeping the US Senate seat and flipping the gubernatorial, as well as 2+ house seats, looks positive for Democrats.

Congressional: Five of the Wolverine State's 14 House races are considered competitive in November. They include the Republican-held 1st, 6th and 7th CDs and the top-targeted 8th District, where Elissa Slotkin (D) is challenging incumbent Mike Bishop (R), as well as the open 11th District, where Democrat Haley Stevens will face off against Republican Lena Epstein. 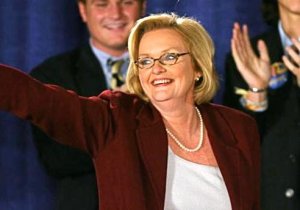 Highlights
Missouri Attorney General Josh Hawley emerged from the 11-way Republican primary to earn the right to challenge incumbent Democratic Senator Claire McCaskill -- one of the upper chamber's most vulnerable members in a state that Trump won by nearly 20 points.

In the First Congressional District incumbent William Lacy Clay defended his seat against progressive primary challenger Cori Bush, and in the Second District, Cort VanOstran (D) will be the challenger to targeted Republican incumbent Ann Wagner.

The most significant win of the night, however, was the ballot initiative victory for labor over implementation of "right-to-work" law that would have exempted state employees from having to pay fairshare collective bargaining fees to a union as a condition of employment. 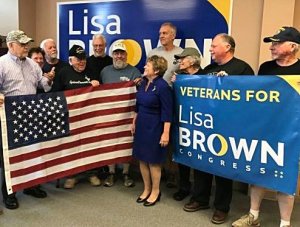 Washington State utilizes a top-two primary system, where the top two voter-getters, regardless of party affiliation, advance to the general election.  Because Washington uses a vote-by-mail process, all votes have not been counted and the results are not yet final.

Highlights
In the US Senate primary, incumbent Maria Cantwell has earned 54.4% of the vote, with Republican State Party Chair Susan Hutchinson second with 23.8%.  The remaining 27 candidates are under 3%.