At now just 15 days before the most important presidential election of our time, 37 states have begun early voting, shattering records for early turnout. As of yesterday, over 26 million Americans had already cast their votes -- a 301% increase over the number at this point in 2016.

Currently, 38 states and the District of Columbia permit no-excuse early voting in some form and all states allow for some form of absentee or mail-in balloting. Some, however, still require voters to provide a valid excuse for being unable to vote on Election Day -- even during the pandemic.

In the unprecedented environment of voting during the age of COVID, it is anticipated that at least half the electorate will vote by mail or early in person, a process that has come under fire by President Trump as "fraught with fraud and abuse" -- setting the stage for a post-election battle.

For our followers, the status of the early voting options in your state. Cast your ballot today and pass it on! 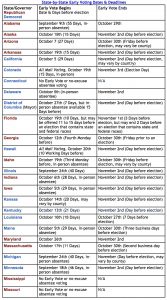 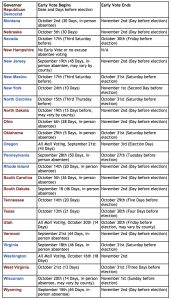 Information is drawn from numerous resources, which vary greatly. Let us know of changes or corrections!

July 18, 2019 The Democratic National Committee (DNC) has announced the top 20 contenders to qualify for the second Democratic primary debate, to be held in Detroit, Michigan July 30th and 31st...