Today marks the 52nd anniversary of the Stonewall riots, the violent and spontaneous demonstrations in New York that are credited with launching the gay liberation movement in our country. 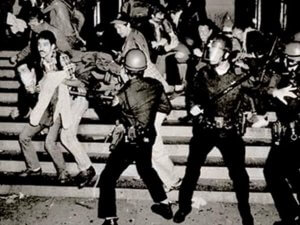 The NY Stonewall riots of 1969 started the Gay Revolution

Beginning of a Movement
In the late 1960s, gay Americans faced an adversarial legal system where every state, with the exception of Illinois, criminalized homosexual acts, even between consenting adults in private homes.

The Stonewall "Uprising" or "Rebellion" came in response to a series of violent police raids that began in the early morning hours of June 28, 1969, at the Stonewall Inn in the Greenwich Village neighborhood of Manhattan, New York City.

Patrons of Stonewall, and other Village lesbian and gay bars, fought back, setting off a new public awareness of their plight, and fueling the development of state and national gay rights organizations.

Annual commemorations of the incident continued, but it was not until 2000 that President Bill Clinton officially declared June as "Gay & Lesbian Pride Month," now known as LGBTQ Pride Month. 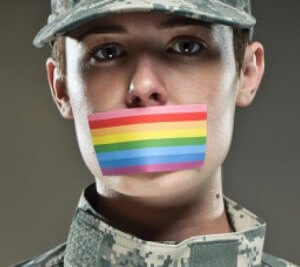 Although the White House was silent on the subject during the George W. Bush years (2001-2008), President Obama recognized Pride Month annually during his 2009-2016 tenure.

Oppressing Pride
While the US Supreme Court prevailed in legalizing same-sex marriage in its landmark 2015 decision, the 2016 election of President Donald Trump began an unrivaled era of suppression of LGBTQ rights.

Trump, who pledged "I will do everything in my power to protect our LGBT citizens" during his campaign, immediately had any mention of the LGBTQ community and their rights erased from the White House and other government websites.

Trump went on to roll back or rescind some 35 measures put in place by the Obama administration to protect LGBTQ Americans from discrimination. 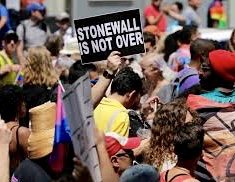 He weaponized our country's agencies against transgender and gender nonconforming individuals in education, healthcare, human services, housing, the workplace and the military.

Among the most egregious acts were those by the Trump Department of Justice to advance discrimination on the basis of sexual orientation under federal law, having filed or joined numerous legal cases at the state and federal level related to suppression of LGBTQ and civil rights.

While many of those decisions, like other actions taken by the Trump administration, have been challenged in court, some of the consequences will still remain with us for generations.

SCOTUS & LGBTQ Rights
Since the Supreme Court's 2015 decision in Obergefell v. Hodges, which legalized gay marriage, the makeup of the Supreme Court had gone from a 5 to 4 liberal majority to a conservative majority of 6 to 3. 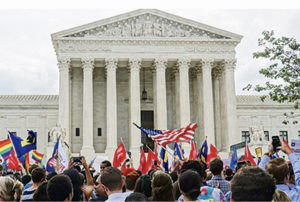 While SCOTUS has since heard a number of significant cases related to LGBTQ rights, the jury is still out on the current court.

In a closely-watched 2018 case, the Court sidestepped a decision on First Amendment claims of free speech and free exercise of religion. In Masterpiece Cakeshop, Ltd. v. Colorado Civil Rights Commission, the state found that a bakery in Lakewood, Colorado, had violated the state's Anti-Discrimination Act by refusing to design a custom wedding cake for a gay couple on the basis that it violated the bakery owner's religious beliefs. The court's 7 to 2 ruling in favor of Masterpiece Cakeshop was based on its finding that the Commission had not properly evaluated the case, thereby invalidating the larger question.

In an historic victory for gay rights, SCOTUS ruled in June 2020 that the protections provided by Title VII of the Civil Rights Act of 1964 extends to LGBT individuals. The decision in Bostock v. Clayton County, thereby made it illegal for workplaces to discriminate on the basis of sexuality or gender identity.

On June 21st of this month, in a decision hailed by conservatives as a win for religious freedom over LGBTQ rights, SCOTUS ruled that the city of Philadelphia violated the First Amendment free-exercise-of-religion rights of a Catholic Social Services (CSS) agency by refusing to refer children for foster care placements due to the agency's refusal to screen same-sex couples.

The Court's unanimous decision in Fulton v. City of Philadelphia, however, was not based on the question of discrimination, but on the interpretation and applicability of the text of the city's ordinances.

Today, the Supreme Court handed the LGBTQ movement a win by declining to hear an appeal challenging the rights of transgender students to use the gender bathroom of their choosing.

The Court's decision to reject the case leaves in place an August 2020 decision by the U.S. Court of Appeals for the 4th Circuit in Gloucester County v. Grimm that ruled the Virginia school board had practiced sex-based discrimination and violated the 14th Amendment by denying Grimm, a transgender student, the right to use the bathroom that aligned with his gender identity. 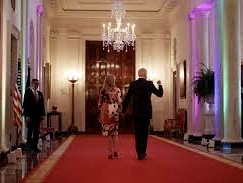 For Pride Month, White House hallway is lit in the colors of the rainbow flag (Boston Globe)

Back In The House
On his first day in office, President Joseph Biden signed an Executive Order banning employment and housing discrimination on the basis of sexual orientation and gender identity.

The executive order also expanded the scope of the government's interpretation of Bostock v. Clayton County to include protections against discrimination outside of employment. Transgender children, therefore, must be allowed to use the locker rooms and bathrooms of their gender identity, and to participate in the sport of their gender identity.

Biden ordered all federal agencies to review existing regulations and policies that prohibit sex discrimination and to revise them to clarify that "sex" includes sexual orientation and gender identity.

He reversed the government's ban on transgender people from serving openly in the military and affirmed that gay and transgender people's access to healthcare was protected under the Affordable Care Act, rolling back another Trump administration discrimination policy.

Nearly 14% of the Biden administration's agency appointees identify as LGBTQ.