The COVID-19 Hate Crimes Act is now headed to President Joe Biden's desk for signature and is expected to be signed swiftly into law.

On Tuesday, the US House of Representatives passed the Act, a bill to address the increase in hate crimes and violence against Asian Americans during the coronavirus pandemic.

The historic legislation, sponsored by Congresswoman Grace Meng (D-NY), passed with a bipartisan vote of 364-62, although all 62 votes against the bill were cast by Republicans. The Senate, sponsored by Senator Mazie Hirono (D-HI), passed the Senate version April 22nd by a vote of 94 to 1. The lone vote against the legislation was Josh Hawley (R-MO).

Hate Crimes in the United States peaked under the administration of Donald Trump, rising in 2019 to the highest level in more than a decade, including the highest number of hate-motivated killings. The majority of those attacks were against African Americans, Jewish and LGBTQ individuals. 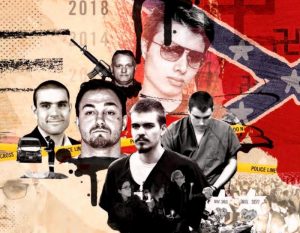 White supremacists remain "the most lethal threat to the Homeland"

White nationalist and supremacist groups alone grew by nearly 50% from 2017 to 2018, and, according to the Department of Homeland Security, "remain the most persistent and lethal threat," having committed half of all lethal domestic terrorism in 2020 and caused 81% of related deaths.

Analysts saw the number of hate crimes and actors decrease in 2020, possibly as a result of the restrictions imposed on citizens by the coronavirus crisis.

It was former President Donald Trump's racist rhetoric around the pandemic, however, that spurred a dramatic increase in attacks on one group, Asian Americans, in the last year. 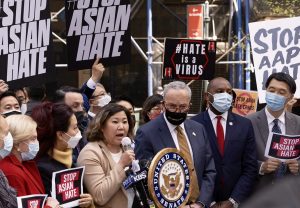 Congresswoman Grace Meng: The AAPI community has faced an "additional pandemic: the virus of hate and bigotry" (Mark Lennihan/AP)

According to the Center for Study of Hate and Extremism, while overall hate crimes decreased by 7% in 16 of America's largest cities in 2020, those targeting Asian American and Pacific Islanders (AAPI) rose by 149%.

Community leaders say the wave of anti-Asian attacks was fueled by Trump, who frequently used racist language like "Chinese virus" and "Kung flu" to refer to the coronavirus, the origins of which were first reported in China.

The COVID-19 Hate Crimes Act is the first legislative action to pass the 117th Congress to counter the discrimination and violence against the AAPI and other communities.

The Act establishes a position at the Justice Department to expedite the agency's review of hate crimes and expands efforts to make the reporting of hate crimes more accessible at the local and state levels, including online resources available in multiple languages. 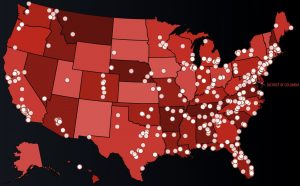 It would also provide grants to law enforcement agencies that train their officers to identify hate crimes and introduce a series of public education campaigns around bias against people of Asian descent.

Apart from federal protections, forty-seven states have passed hate crime laws. Only Arkansas, South Carolina and Wyoming don't have such laws on the books.

SignUp for the Daily update on the issues, politics and players

July 29, 2022  Now just 100 days out from the November 8, 2022 elections, the contest for control of the US House of Representatives is in clearer focus. The partisan breakdown of the current...