To some it may have appeared to be typical Congressional grandstanding -- but this week's 26-hour "SIT-IN" by Democratic Members of Congress was a much-needed reminder of the issues at stake in this election, and why our voices and our votes make a difference. Or at least we hope so. 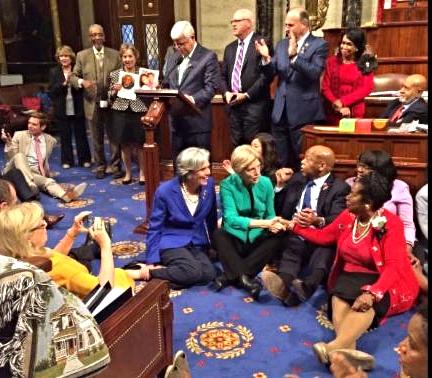 How It Went Down
The Issue: Gun Control
The Goal: Secure commitment from the Republican House Leadership to schedule votes on gun control legislation.

When: Wednesday @11:24am
Congressman John Lewis and approximately 40 Democratic colleagues began the protest by reciting the Pledge of Allegiance and vowing "to occupy the floor of the House until there is action."

The Republican leadership attempted to conduct business but the Democrats members refused to participate, shouting "No Bill, No Break."

GOP leadership ordered the C-SPAN cameras turned off, but Members used their phones to record the drama as it unfolded. Congressman Scott Peters, (D-CA) filmed the action with an app (Periscope), which was in-turn broadcast by C-SPAN.

"I've had it with the gun grabbing Democrats and their sit in anti 2nd amendment jihad. I'm going to go home and buy a new gun."

Lewis, one of the icons of the civil rights movement, began organizing sit-ins at segregated lunch counters in the Nashville area while studying at Fisk University.

Wednesday Lewis led fellow Dems in singing "We Shall Overcome" and vowed "we shall pass a bill."

The Congressman had written a letter to House Speaker Paul Ryan -- demanding that he keep the House in session for more debate on gun control legislation in the wake of the Orlando shootings.

How It Played Out
In the end, the 170+ Democratic lawmakers who participated relinquished the floor, vowing to take the issue to their constituents over the House Recess, and to pick up the fight when they return July 5th after the July 4th Holiday weekend.

The Late Show's Stephen Colbert commented at the end of the night, "Thank you Congress, for sitting on your asses."

February 2, 2021 The labor movement, and the country, lost a legendary leader this week with the passing of former AFL-CIO President John Sweeney. Sweeney, who served for five terms as President...

March 2, 2021 The history of the federal minimum wage, already one of political struggle, added a new footnote to its tumultuous journey last Thursday when it became the center of a parliamentary...